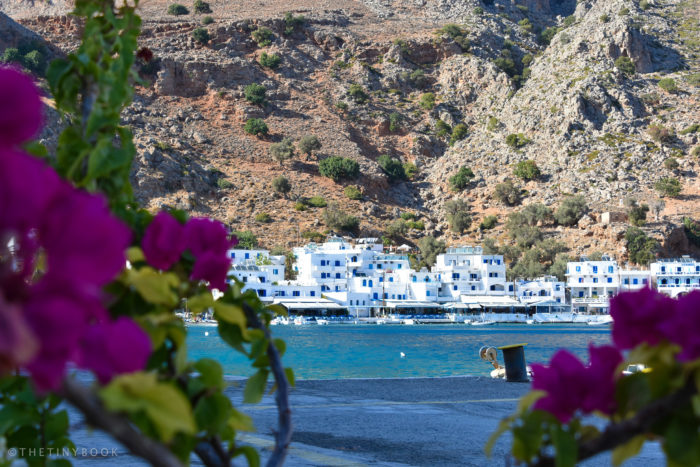 Loutro (from the Greek “bath”) is a small and picturesque fishing village on the southern coast of the Chania Prefecture in the west of Crete. It lies between the town of Chora Sfakion and the coastal village of Agia Roumeli, known for being the exit to the Samaria Gorge.

The History of Loutro

This tiny bay attracts visitors due to the many ancient baths that have been found in the area. It is also the site of the ancient city of Phoenix (today Finikas) which used to be the port of the old Anopolis, higher up in the mountains. And it was a rather important harbor during Classic times.

As years passed, Loutro also functioned as the port that the region of Sfakia would use during the winter. Its natural shape offered excellent protection during bad weather conditions.

The area of Loutro was also a shelter used by Saracen pirates. These would find refuge in the bay from where they attacked ships passing by. When the Venetians managed to conquer the port, they built a small fortress which ruins are still visible. There are also the remains of a later Turkish fortress in the hills of Loutro.

How to Get to Loutro

There are not many ways to access the bay of Loutro. Boats run several times daily from the nearby city of Chora Sfakion, reaching Loutro in about 30 minutes.

It is also possible to arrive hiking along the coastal mountain road from Chora Sfakion. The trail passes over some of the most inaccessible beaches of the Libyc sea.

What to Do in Loutro

The village is known for the tranquility and rather limited nocturnal life. Other than spending the day swimming its turquoise waters, Loutro has a great local cuisine. Seaside tavernas offer a wide range of fresh fish dishes – usually, the catch of the day – cooked right after you have made your choice.

The ones who would opt for more active adventures choose to hike in the scenic mountains, reaching places of unique beauty, such as the upper village of Anopolis or the different bays along the coast.

Though Loutro is worldwide famous for its crystal clear waters, the strip of coast is rather narrow making it difficult at times to find a free spot on the pebbles. For this reason, many board one of the local taxi boats to visit the different solitary beaches around.

Among these beaches, Perivolakia and Timio Stavros are completely solitary and rather small. They have a rocky coast while the transparent waters combine with the sparkling white pebbles.

Marmara is also known as Dialiskari beach. This spectacular secluded bay of pebbles is located very near the exit of the gorge of Aradena, 5 km west of Loutro. Here is where the ones hiking the Aradena Gorge rest before continuing on their path.The taverna on top of the beach, Marmara (Source: Maesi64 [CC0], from Wikimedia Commons).Marmara is a term that stands for “marbles”, and it is the name the beach receives due to colorful rocks and sea caves in the place. Since there are no roads, it is possible to get to Marmara there either with a boat or walking from Loutro (about 60 minutes). There is one small tavern near the beach as well as umbrellas.

The most famous of the beaches near Loutro is Glyka Nera (meaning “sweet water”). This spot is popular due to the wide extension of sand mixed with pebbles, the impressive deep blue of its waters, and the shady tamarisk trees.

The beach lies between Chora Sfakion and Loutro and it became known when, in 2003, London Times included Glyka Nera in the list of the 20 Best Beaches in Europe. Very much like everywhere on the southern coast of Crete, seawater is generally cold because of the springs, even in midsummer.

Its name makes reference to the natural sources of drinkable water to be found gushing from the pebbles. However, those deciding to take a day trip to Glyka Nera should overlook the fact that after a very dry season, springs can be completely dry. In summer a tavern built on the water sells food and cold drinks.

Access to Glyka Near is normally by boat, but adventurers can also enjoy the path departing from Chora Sfakion (about 30 minutes). It is not weird to find goats on the way and even to sunbathe with them on the beach.

The trail starting in Loutro takes about an hour instead. Despite many describe the path as too near the edge of the mountain, the road is part of the European E4 footpath, therefore safe and well conserved by the local authorities.

Ferries run daily connecting Loutro to nearby cities and to Agia Roumeli, the exit-point of the Samarian Gorge.