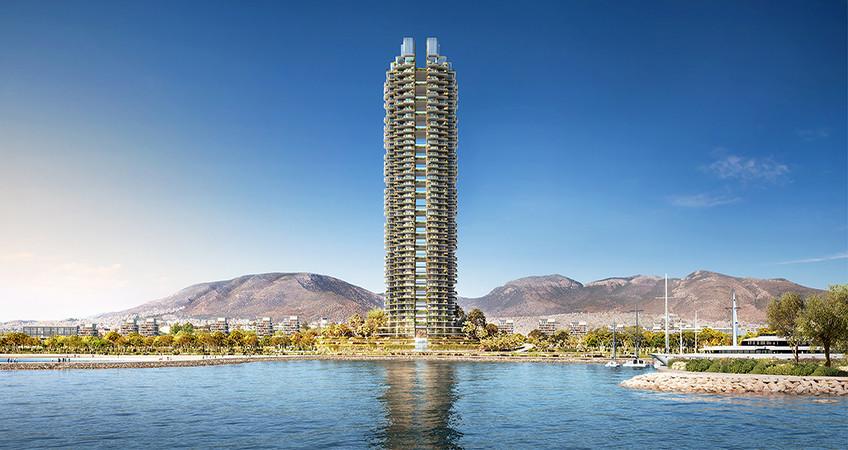 Riviera Tower is a residential high-rise building that will be built in Ellinikon by the development company Lamda Development. The project, in which they are going to invest €350 million, will begin to be implemented by the end of the year - the developer has received all the necessary permits. In his speech on the tower, Odysseas Athanasiou, Managing Director of the company, emphasized that according to the plan, by March 30, 2026, the first owners of real estate in the Riviera will receive the keys and will be able to move in. And this despite the fact that the first few floors of the 200-meter giant will begin to be built only in 2023.

The event dedicated to the launch of the Riviera Tower project was attended by the Prime Minister of Greece. Kyriakos Mitsotakis fully supported the initiative, noting that in the future Riviera will not only be able to attract domestic investment to Ellinikon, but will also have a positive impact on the growth of the tourist flow.

Kyriakos Mitsotakis at the event spoke not only about the prospects, but also about the consequences of the "big construction" in Ellinikon. So, according to him, the project, already at the launch stage, influenced pricing in the real estate market of the area - house prices rose sharply. Therefore, in order for as many people as possible to have the opportunity to settle in the southern suburbs of Athens, a system of subsidies from Lamda Development and banks will soon be launched in the format of extended loan agreements. As for who will be eligible for the subsidy and under what conditions, it is too early to say - many variables are not yet clear and need to be further developed.

Not surprisingly, the interest in the promised subsidy program is quite high. The fact is that it has already become known how much square meters will cost in the new area - at the stage of preliminary sales, we are talking about the amount of 5-6 thousand euros per square meter. Of course, as the territory of the former Athens Airport is built up, the price tag will grow in proportion to the development of infrastructure.

For the fourth quarter of 2022, it is known that in addition to the 200-meter Riviera Tower, at least a thousand properties will be built in Ellinikon. The largest concentration of residential buildings, according to the project documents, is planned in the area above Poseidonos Avenue. The area's key developer, Lamda Development, has seriously taken on the transformation of a not-so-prosperous part of the capital's suburbs into a modern seaside resort with modern buildings and everything necessary for both a comfortable life and a memorable vacation.

The "big construction" in Ellinikon is in full swing and has no plans to end. even though the cost of real estate in the area is steadily growing, the interest of investors does not subside, because the announced 5-6 thousand euros per square meter are quite comparable with the price tags in the much more remote suburbs of the Greek capital. In addition, foreigners who want to buy property in Greece are also actively interested in the buildings under construction in Ellinikon.