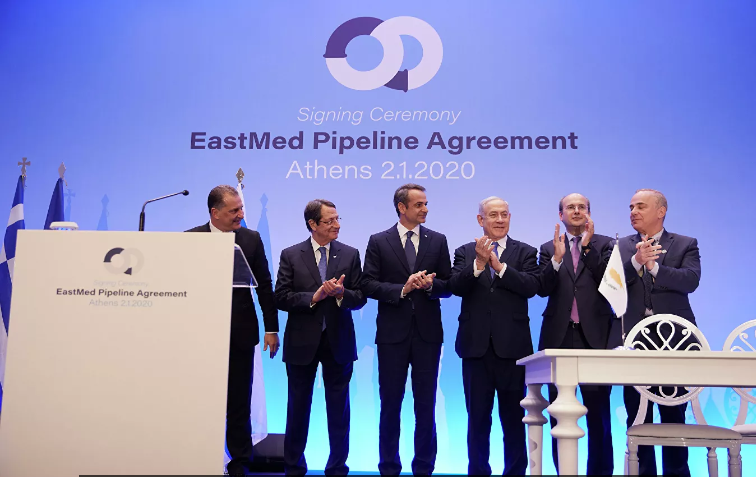 The leaders of the Greek, Cypriot and Israeli energy sectors met in Athens to discuss the construction of a gas pipeline. The ministers reached an agreement and signed a document in accordance with which the EastMed pipeline project will be implemented. A gas pipeline with a length of 1900 kilometers will be laid along the bottom of the Mediterranean Sea through the island of Crete.

The Ministry of Energy of the three countries plans to jointly invest €5.5-6.3 billion in the construction of the gas pipeline. According to preliminary plans, it will be possible to open gas transportation to Greece by 2025. For every 12 months of operation, the highway will deliver 10 billion cubic meters of blue fuel.

The East Mediterranean gas pipeline will be designed to transport blue fuel to Greece from fields near the island of Cyprus and in Israel. They have huge reserves, therefore they are beneficial for Europe in the long run. In addition, new gas fields are constantly being discovered along the coast of Cyprus, and industrial gas production has recently started in Israel at one of the largest offshore fields, Leviathan.

Europe has the greatest interest in the EastMed pipeline project because thanks to it it will be possible to diversify its own resources. The EU’s positive attitude is due to the European Energy Security Strategy, which was adopted in the spring of 2014. The EU wants to receive not only Russian and Azerbaijani gas but also blue fuel from other regions in order to prevent the emergence of monopolistic relations in the segment.

An ardent opponent of creating a new gas pipeline in Turkey. According to its representatives, the plan of Greece, Israel, and Cyprus is a waste of time and financial resources, since TANAP has long been created and successfully operates to transport blue fuel. Using this highway, gas from Azerbaijan is redirected to Greece.

In response to the Turkish protest, the Greek Prime Minister noted that an agreement to create a new transport route with Cyprus and Israel is not a way to harm any of the countries. The statement of the head of the Greek cabinet was supported by the Prime Minister of Israel and the President of Cyprus. Representatives of the three states say that the main task that stood in the decision-making process was to stabilize the energy situation in the region.