Real estate on the island of Crete. Sale and rent of houses, apartments, villas and cottages 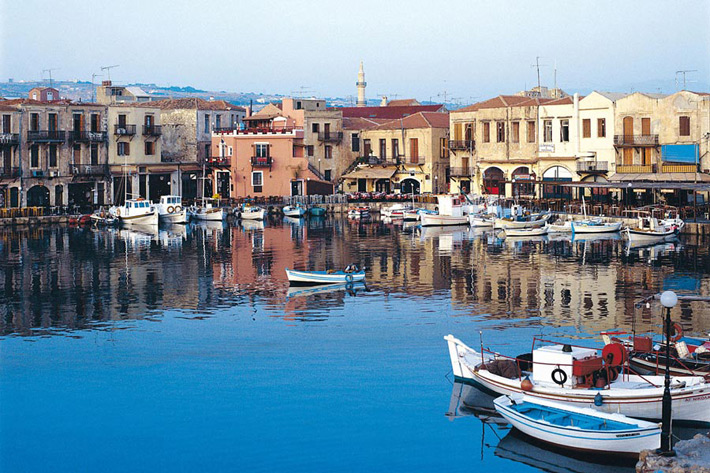 Crete is the southernmost and the biggest island in Greece. Its coast line runs for a thousand kilometers, and its shore is indented with numerous coves, grottos and sheer rocks. This unique island is bathing in warm water of the Mediterranean. As a tourist destination, Crete is more popular than other Greek islands, and every visitor will find something to do here that would match his personal tastes. Beach and sun lovers will enjoy its excellent beaches and secluded coves and its active sea coast villages warmed by the sun 300 days a year. Crete’s highly developed infrastructure, its luxuriant sea resorts and hotels and its amazingly untouched nature make the island a popular spot where lots of people buy property. Apart from its stunning views blending with horizon, Crete is famous for its rich history. If you are keen on history, you will enjoy visiting its numerous sights and memorial places. It was here that Europe’s most ancient Minoan civilization came into being, and it laid the foundation to Ancient Greek and European culture. Its artifacts are exhibited in Knossos, Festa and Gortina museums.

Crete looks like a miniature universe full of beauty and various treasures. You may get an impression that your life is too short to explore and to discover all parts of the island. But if you buy real estate there, you’ll win a magic ticket that will allow you to visit Crete again and again.

Crete is 13th Greek periphery; it is divided into 4 regions: Heraclion, Chania, Rethymno and Lassiti, with its administrative centre in Agios Nikolaos. Knossos was its ancient capital, and archeological excavations discovered its magnificent architectural ensemble, with its palace, numerous villas, roads and colonnades. Since Knossos palace is closely related to Minos, its legendary king, ancient Crete civilization was also called Minoan. The Greek settled down here much later, but they also held Minoan culture in great respect. And perhaps that is the reason why they believed that Zeus the Thunderer’s mother chose one of Crete caves to hide her newborn baby from its father, and the almighty god spent his childhood years in Crete as well.

Crete climate is considered one of the mildest and healthiest in Europe. The island is also famous for its unique ecological situation: the nearest factory is located a couple hundred miles away from Crete. Swimming season starts end of April here and it lasts till mid-November. Crete winter is short and mild, and the temperature never drops down below +13-18C. And even in the middle of winter the water temperature stays round +16C.

Crete real estate has been long since discovered by the fans of luxurious and sophisticated vacations spent far away from the fuss of big cities, amongst ancient ruins and untouched nature. The sea stays as transparent and crystal clear as it used to be in those times when Olympic Gods came to swim there. And local nature features untouched spots famous for its virgin fauna and flora. Villa and apartment prices here are not higher (and sometimes even much lower) than in mainland Greece. Each part of Crete has its own peculiarities regarding its natural landscapes and the property offered for sale.

Heraclion is the largest Crete region, and its capital also bears the same name. It’s the island’s administrative centre as well. In this region there are lots of large sea coast tourist centers such as Khersonissos, Malya, Stalida and Agia Pelagya. The coast line is indented with a large number of picturesque coves and bays, and different types of good hotels are located on their shore. It’s a weighty argument for buying property which you plan to rent out. Heraclion International airport is quite large, and it operates hundreds of regular and charter flights all year round. Numerous churches dating back to various ages have survived here, as well as elegant neoclassical houses decorated with Balkan style ornaments. Once they belonged to local wealthy families. The city is also famous for its fountains - a legacy from Venetian and Turkish era. And the world famous Knossos palace is located a few kilometers from Heraclion. The jewel with a bee image which became the Crete talisman was found here, and local jewelers make lots of modern copies of this jewel. Crete property prices (near Heraclion) start from 1150 Euro per square meter. 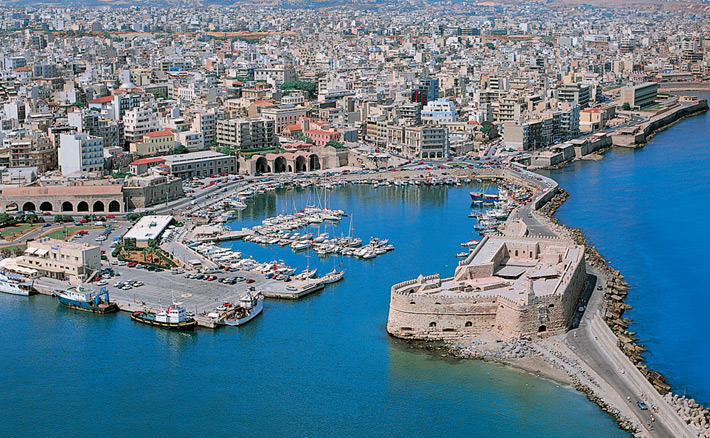 Lassiti region includes Agios Nikolaos, Elunda,Istron, Ieroperta and Sitya cities. The region lies in the very east of Crete and it features fertile valleys and spacious beaches. The famous Finikodassos beach – the one surrounded with palm groves – is also located here. Every person who visited this area once dreams of buying property here. Agios Nikolaos, the administrative centre of the region, is located in the north western part of Mirabello bay, the largest bay in Crete. The most fashionable sea resorts are situated here as well. Sometimes they are called “The Crete St Tropes”. The symbol of Agios Nikolaos, its capital, is the Vulyagmeni (Drown) Lake. A channel connects it to the sea, and an ancient legend says that Athena the Goddess herself took her baths here. If you consider buying property here, you would find it useful to know that you will have to pay at least 220 000 Euro (or more) for a townhouse or an apartment in Lassiti. 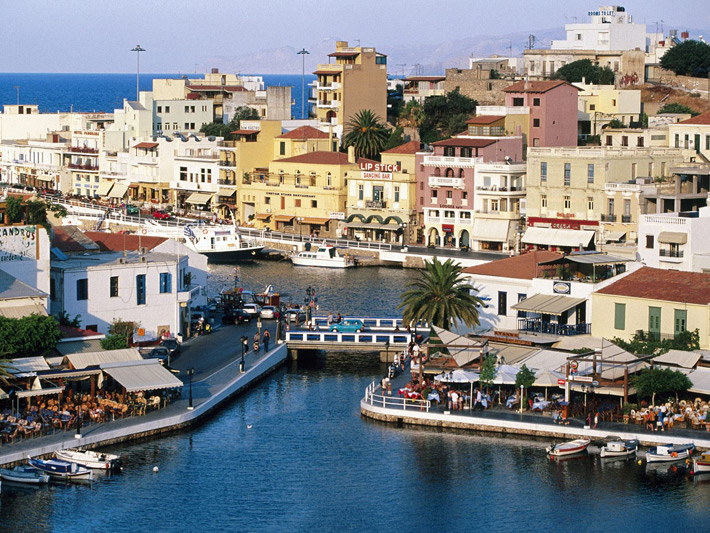 The famous Elunda is located in the western part of Mirabella bay. Spinalonga island with its ruins of a Venetian fortress lies in the bay mouth. It was made famous all over the world by a bestselling book “The Island” written by A. Heathlope, a well known British writer. Most expensive and comfortable hotels and numerous cafes and restaurants are located in Elunda as well as a great number of various big and small shops. Those who favor sophisticated and luxurious vacation style will definitely appreciate this sea resort. Time slows down here, so relax and enjoy the leisure this place offers. Quite a few nobilities and celebrities (including show business stars) buy real estate here or have their magnificent villas with swimming pools constructed in Elunda. Elunda property (including its villas) is exclusive and most luxurious in Crete, and it will meet the requirements of the most demanding and sophisticated buyer. Expensive hotels and restaurants, golf courses and yacht clubs and most exclusive boutiques are also located here. The price of Elunda property (a cottage or a villa in Lassiti, Crete) starts from 320 000 Euro. 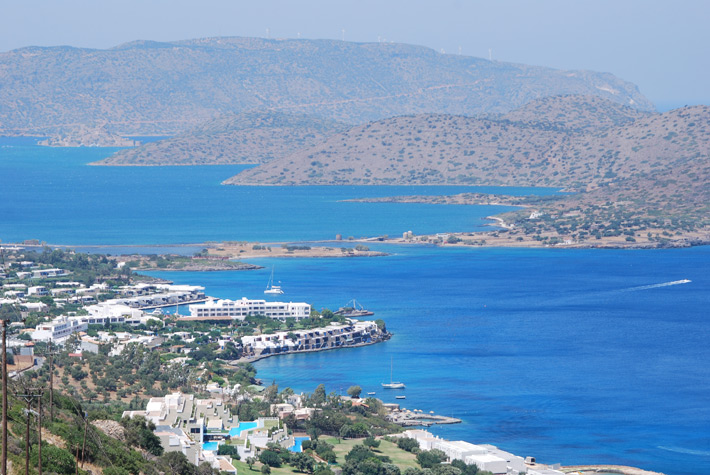 Rethymno region consists of Rethymno (its capital), Panormo, Plakyas, Agia Galini and Bali cities. Venetians called the city Rettimo, and sea trade thrived here in those times. Malvasia, the famous sweet wine produced in the neighboring Malevisiu Valley, was exported from here, and wine barrels traveled all over Europe and even reached Portuguese colonies in India. Rethymno offers gorgeous mountain views, breathtakingly beautiful beaches as well as authentic Crete music, traditional villages – and luxurious hotels. It’s the smallest Crete region located between the White Mountains and Psylorithis Mount. Amazing panoramas of its majestic mountain ranges makes the life here so romantic and the place, so special. In the northern part of the region you will find a marvelous sandy beach running for 16km. Its golden sand is a rare advantage, and no other city in Crete can boast of something like this. Local real estate owners are proud of if, because it is the longest beach in Crete. You can spot clear marks of Venetian style in the city architecture. In the heart of Rethymno Old City you will see the Rimondi fountain dating back to the 17th century. Local Archeology museum, Venetian Fortezza fortress and the Orthodox Arkadi monastery are also worth a visit. Property prices in Rethymno start from 1000 Euro per square meter. 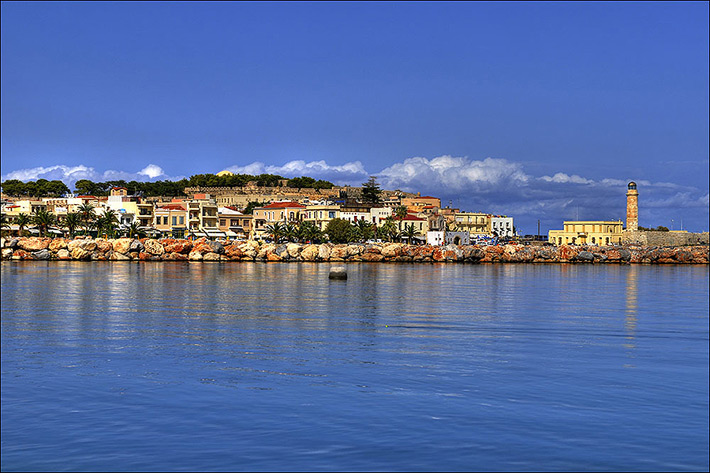 Chania region includes Georgiupolis, Kurnas, Chania, Agia Marina, Gerani and Paleokhora cities. This is the greenest part of Crete, because it often rains here in winter. The White Mountains, the region’s main mountain range, are covered with cypress forests which resemble of luxuriant Crete vegetation of Minoan times. In Chania city cemetery you will see the graves of Russian sailors and navy officers killed near Crete Island in 1897-1911. And next to it there is a memorial obelisk with a five-pointed star on its top. Its legend says that 33 Russian soldiers killed in Crete in World War II were buried and found their eternal peace here. Apart from its rich history, Chania region is famous for its Samaria canyon. This canyon is the largest one in Europe, and each summer it attracts thousands of tourists. Buying property in Chania gives you a good chance to live next to this amazing place. A trekking route across the canyon runs for 18km, and this 7hours long walk will give you a chance to discover its astonishing beauty. The starting point is located 1250m above the sea level. The walking path runs along the mountain slope and it is protected with wooden rails. Inside the canyon you will see a couple of ancient churches and renovated traditional Crete houses of the former Samaria village. The walk will take you about 6 hours, but it is definitely worth a try: swimming in emerald waters of the Libyan sea and sunbathing on its black sand beach would be a good reward for the effort. Real estate prices in this part of Crete start from 1500 Euro per square meter.

If you consider buying real estate in an island famous for its unique history, its ancient traditions of hospitality as well as f or its breathtakingly beautiful nature, Crete with its reasonable prices is your best choice.