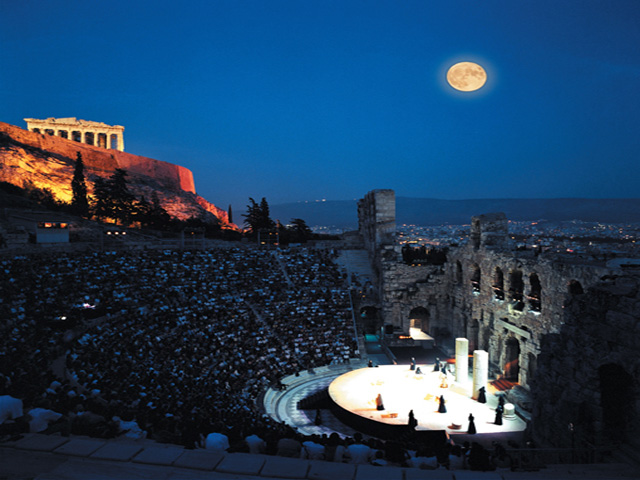 -   Athens Epidaurus Festival The Athens Epidaurus Greek Festival takes place every summer (from June to August) and includes various performances, like modern theatre, ancient drama, ballet, opera, jazz and classical music concerts and art exhibitions. The events take place in various theatres around Athens and in the Ancient Theatre of Epidaurus. In fact, the peak of this festival are the ancient drama performances that are displayed in summer weekends in Epidaurus.  Web: www.greekfestival.gr

-  Sani Festival A yearly celebration since 1993, bringing together nationally and internationally acclaimed artists at Sani Halkidiki. Events, such as music concerts, dance performances and painting exhibitions, are held in different venues around the Sani Resort from July to September. Web: www.sanifestival.gr

-  Kastoria River Party
August brings before you the heatwave of Nestorio River Party. And it is exactly that: a 5-day party! From the 1st to the 5th of August, four different stages, with artists from the Greek and international scene, give you the most alternative version of a summer festival literally next to the river. This year you will have the chance to enjoy Nouvelle Vague and Thievery Corporation in a scenery like no other! Do not forget your swimming suit!

-  More Festivals in Greece A large range of other cultural events and festivals take place all around Greece and the Greek islands. Most festivals are organized in summer.