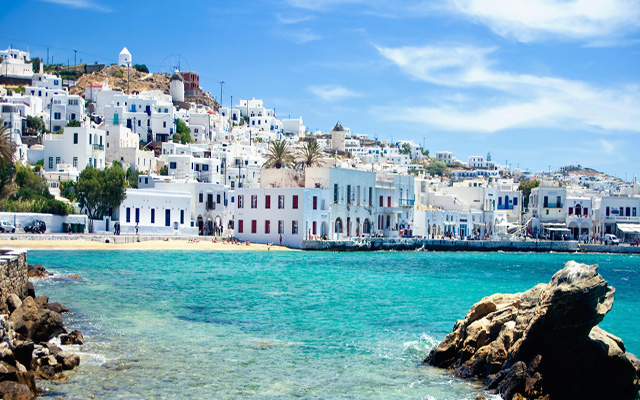 “After six stark years of recession, debt-stricken Greece is back, doing what it has done since the 50s, drawing in holidaymakers from far and wide, only this time at record-breaking rates,” says British newspaper The Guardian in an article on the Greek tourism industry’s success in 2014 that was published today.

The eurozone crisis has swept over the country like a storm, the article continues, leaving despair and destruction in its wake: almost no household has not felt the effects of wage and pension cuts (slashed by an average 40%), soaring taxes and unemployment that at 26.7% is the highest in the EU and unprecedented in Greece’s post-war history.

In such circumstances, the journalist notes, only one in four Greeks will be able to go on holiday this summer, according to a poll published by the consumer protection group Inka this week.

However, in a country where trickle-down economics begins with tourism – one in five of the working population are dependent on the sector – the arrival of foreign visitors has brought relief, according to the article.
It has also reinforced the official narrative, so often unfelt by those on the ground, that after achieving the biggest fiscal adjustment in global history, things are finally improving for the eurozone’s weakest link, the journalist stresses.
Tourism was the first sector to be hit when the scale of Athens’ budgetary overflows became apparent in late 2009, The Guardian says. No place was worst affected than Athens, from where televised images of riots, tear gas and burning buildings were shown around the world.
Yet, in a turnaround that has surprised even industry figures, the Greek capital is expected to see a 750,000 increase in arrivals this year. Already one million tourists have arrived – spilling out of archaeological sites and the narrow alleyways of the picturesque Plaka district beneath the Acropolis, piling into restaurants and cafes and cramming the stores that sell sandals, statues, T-shirts and bags.

“Tourism is the low-hanging fruit of the Greek economy. We have the basic infrastructure. We don’t need to make huge investments. It’s all there,” Alexandros Vassilikos, chair of the Athens Hoteliers Association told The Guardian.” Half of the 19 million we are expecting this year will visit Greece in the next 90 days,” adds Vassilikos. “If we want to reap more benefits from tourism it is vital that we improve our product, extend the season, branch into other niche markets like cultural and medical tourism.”