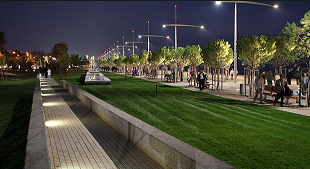 Update embankment Thessaloniki - a favorite place of citizens and guests- and so deservedly! New urban promenade, one of the most important projects for the expansion and improvement of urban public space, carried out in Thessaloniki in recent years, has won awards XXV World Congress of the International Union of Architects in Durban (South Africa), on the theme "Architecture: different in other places. Search for other ways to create a better future »(Architecture otherwhere). Greek architect was the winner in the category "Public place: friendly and accessible to all."

UIA Congress, taking place in the South African Republic, devoted to the study of architectural space, especially the medium and its importance in creating the most comfortable living conditions for people. Today, when the process of urbanization is growing, they set a reference point, which must define a new level of creative investment in the city, their modern architecture and infrastructure, to be a catalyst in setting priorities, the important tasks for the formation of a new built-up space.

Award won by Greek architects in one of the largest architectural forums, pride not only for the authors, but also for the people of Thessaloniki and Greece.

City embankment Thessaloniki - one of the city's history particles. Its stones remember many of the famous people of Greece. Here there were important events in the life of the city are the Royal Theatre, Concert Hall and many other attractions. Hence, from the White Tower - the symbol of the city, starting all the sightseeing tours around the city.