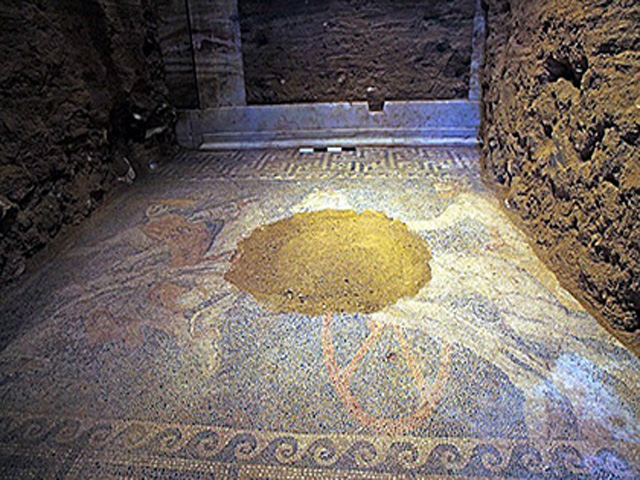 In Greece, archaeologists have discovered a floor mosaic of the IV century BC. It is reported by BBC News, with reference to the Greek Ministry of Culture.

Mosaic 3 by 4.5 meters was found during excavations of the largest tombs of the ancient city of Amphipolis, which is located in the north of Greece, 100 km from Thessaloniki.

The central part of the puzzle is damaged, but scientists hope to restore it.

Some archaeologists believe that the tomb may have belonged to someone from the family of Alexander the Great, for example, his wife Roxane or mother Olympia. Other scholars argue that this is a false tomb, the so-called cenotaph.

Mosaic is made of white, black, blue, red, yellow and gray stones. It shows two men. One of them on the head of a laurel wreath, and he manages a chariot drawn by two white horses. Horse by the bridle is the god Hermes, who is considered the conductor of souls of the dead to the underworld.

Alexander the Great was Macedonian king from 336 to 323 BC. For his short reign, he founded 70 cities and conquered the Persian Empire. He died in Babylon and is believed to have been buried in Egypt, but his burial place has not been found. After Alexander's death, his empire quickly disintegrated.