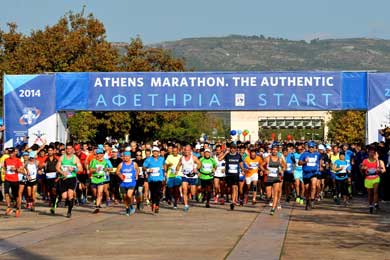 The wonderful picture of many thousands of fans at the Panathenaic Stadium, along with the tens of thousands who lined up the course along the 42 kilometers added to the ever-rising profile of the race that as of this year is named “Authentic” to remind everyone where this wonderful sporting event traces its root at.

The perfect weather conditions and the excellent organization of the 32nd Athens Marathon – the Authentic, brought the best out of Felix Kandie who registered a new record in the authentic course from Marathonas to Athens on Sunday morning. Kandie beat the previous race-record-holder Raymond Bett to second by almost two minutes, with Kiptanui Chobei in third and last year’s winner Hillary Yego in fourth. Christoforos Merousis from the island of Chios, was the first among the Greeks to win the national championship, for a second year in a row. Naomi Maiyo was the first among women reaching the finishing line at the Panathenaic Stadium after two hours 41 minutes and five seconds.

“This is an opportunity for people from the world over to get to visit Athens in November, with visiting rates already on the rise. There are tens of thousands of people who have arrived for the event and every year their number grows. More and more top Marathon runners visit Athens to run the Authentic course following the promotion we have done around the world,” said Tourism Minister Olga Kefalogianni who attended the finishing of the race.