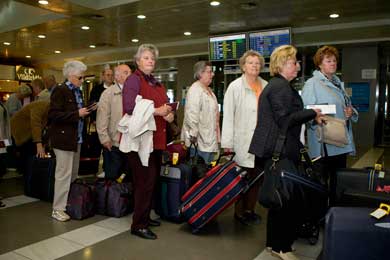 The total number of visitors to Greece this year will end up at around 23 million, according to the latest estimates by the Association of Hellenic Tourism Enterprises (SETE), exceeding even the most optimistic forecasts regarding tourism in 2014. SETE has just incorporated October data into its projections for the year that now point to 20.5 arrivals from abroad.

Data from the country’s main airports in the first 10 months of the year point to 15 percent growth in tourism arrivals from abroad as they came to 14 million, from 12.2 million in the January-October 2013 period. The biggest annual increase by far was observed at Kalamata Airport (72.3 percent), followed by the air terminals on Myconos (39 percent), in Athens (29.4 percent) and on Santorini (26.9 percent). In absolute figures however the greatest rise was at Athens International Airport, which saw an increase of 700,000 passengers.

In October alone, air arrivals from abroad broke the 1-million barrier, posting annual growth of 23.5 percent, with a 200 percent rise at Kalamata Airport and a 38.6 percent increase at Athens Airport.

SETE head Andreas Andreadis commented that despite the deterioration in the economic climate in Europe, Greece is expected to enter the world’s top 15 tourism destinations.