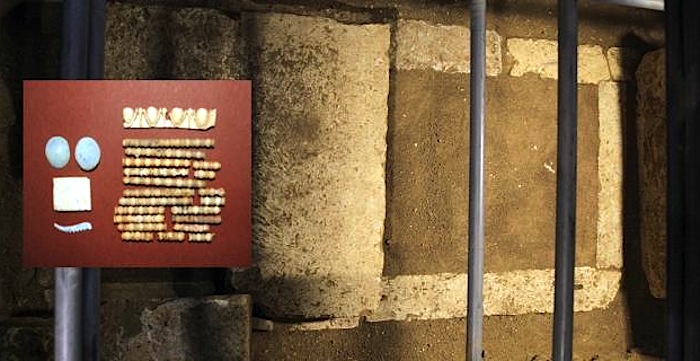 A  tomb and a skeleton were discovered during the excavation works at the Kasta hill at ancient Amphipolis. According to the Culture ministry, 1.60 m below the stone-flagged floor level in the third chamber of the tomb, excavators found a large box-shaped tomb with scattered iron and copper nails as well as bone and glass coffin ornaments. Bones were also found inside and outside the tomb.Inside the tomb, excavators found a built-in space to receive a wooden coffin measuring 0.54m x 2.35m. The total height of the third chamber is 8.9 metres from the top of the chamber's ceiling to the bottom of the excavated trench.According to the ministry announcement, parts of the skeleton of the deceased were found both inside and outside the tomb. The genetic material will be processed by experts, while all the necessary tests will be conducted.The ministry is studying about 500 fragments of the structure scattered around and identified as belonging to the peribolos, or surrounding wall, of the tomb in order to determine the further progress of the restoration works.