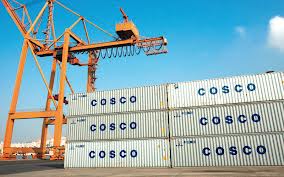 PCT is counting on demand for sea and rail transport near the crossroads of three continents to expand operations at Piraeus, which is the first major European container port for ships entering the Mediterranean Sea through the Suez Canal. The port of Athens since antiquity, Piraeus has grown since Cosco’s entry into the market in 2009 to become the 10th-biggest container port in the European Union, according to EU statistics agency Eurostat.

Earlier this month, PCT also began receiving return cargo by rail from central Europe for distribution in Greece by truck or for onward transport to destinations abroad by ship, “a service we’re trying to expand,” he said.

In that context, Piraeus also has the chance to become a distribution center for Europe, the Middle East and Africa, Vamvakidis said.