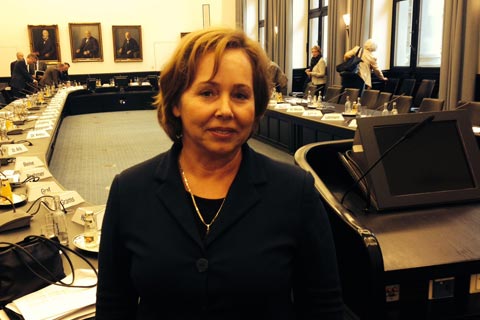 Dr Virginia Green (nee Virginia Giovanoudi), founder and managing director of ENCOS, was named Manager of the Year for 2014 by TUV Nord, a group of multinationals with 10,000 workers in 70 countries which provides security and certification services. She studied chemical technology at the University of Dortmund. She took her first professional steps at the Esso petroleum company before embarking on a PhD while a mother of two. After years of working as a top-flight executive at various firms, Green decided to go it alone.

She founded Green Engineering in 1990, a company that carried out technical studies for chemical, petrochemical and pharmaceutical firms, and in 2000 created ENCOS (Engineering Constructions Service), a consortium between Green Engineering and Kohling & Partner. ENCOS specializes in the design and construction of factories and facilities for the chemicals industry and is considered among the best in its field worldwide thanks to its committment to health and safety standards.

Based in Hamburg, ENCOS has branches in Frankfurt, Greifswald and Thessaloniki, as well as a smaller office in Athens. It has more than 150 employees of various nationalities, 25 of whom are Greek.

Green said: “Women do not lack any skills when it comes to business and this is proven by their constantly increasing presence in the business arena. I would also venture to add that we also have the advantage of a better understanding of problems and of the particularities of our associates by our very nature. Furthermore, as a rule, women manage operating costs in a more frugal manner and they generally avoid showing off.”

“You must be willing to take risks and not to become complacent like an employee who is only concerned with the next paycheck,” said Green. “You have to keep a clear head and be calm and collected, avoiding passionate reactions to the ups and downs of business but also to the upsets of life more generally. You need to have a good knowledge of the market in which you’re interested to keep abreast of developments. You have to be strict and in control, but also objective and open to recognizing the qualities of your associates as much as those of your competitors.”