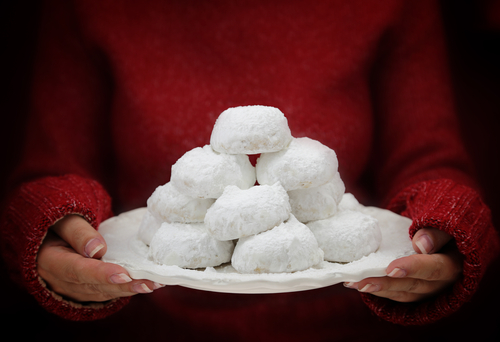 Christmas is an important cultural event in Greece. Food plays a great role of the holiday season, as gifts, feasts, and symbols. Baked goods are especially important and every region added its own special twist to the traditional recipes.

Greek Holiday Baking, as in most cultures, is an important part of Greek cooking for Christmas. Traditional items, such as Christmas bread or “stravropsomo”, a fruit-filled loaf, decorated on top with the sign of the cross and Chistopsomo or “Christ’s Bread”, a leavened bread made of flour, sesame seeds, and spices, such as anise, orange, cloves, and cinnamon accompanied by dried figs, are eaten on Christmas Eve.

“Vassilopita” is the famous Greek New Year’s Cake. It is made in honor of a beautiful act of charity by St. Basil to the poor and needy of his flock. In order to insure that the needy would have money for life’s necessities. St. Basil had the ladies of his church bake sweet bread with coins baked into them. In this way he could give them money without demeaning them at all. It is therefore traditional to bake a coin into the Vasilopita (St. Basil’s Bread). The one who receives the coin is considered to be especially blessed for the year.

The traditional Christmas Day feast is centered about either a turkey or goose, stuffed with a mixture of rice, pine nuts, chestnuts, cinnamon, cloves, and allspice. Roast pork with cabbage or cauliflower is another popular holiday choice, one that dates back to the early Christian era. The Christmas meal is usually a large one, often featuring two or more main dishes. Side dishes, such as roast potatoes and grilled vegetables accompany the meal.

A Greek Christmas is about sharing the joy of the season with family and friends.