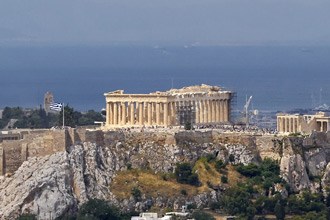 The European Commission will select sixteen historically and culturally important sites around Europe have been recommended to receive the European Heritage Label (EHL). The label celebrates the cultural diversity of the continent and highlights a sense of a shared European belonging.

The heart of Ancient Athens comprises nearly one hundred monuments of          European significance, such as the Acropolis hill, the Ancient and Roman agorae, Hadrian´s library, the Pnyx hill,       and the Kerameikos cemetery. They make up a rich

historical landscape            where events fundamental to the            formation of essential aspects of European culture and identity took place, from the development of classical art and theatre, to democracy, equal rights, and science. These monuments witnessed the birth and upbringing of key figures in European history whose intellectual achievements made an indelible mark on the definition            of European common values as expressed in a variety of areas ranging from political and legal thought (Pericles),   art and architecture (Phidias), literature and drama (Aeschylus, Sophocles, Euripides), medicine and science (Hippocrates), historical writing and the construction memory (Herodotus, Thucydides), just to name a few. The candidate site meets the criteria for European significance required for the European Heritage          Label.

A total of 36 sites were submitted to the European Commission for pre-selection, in view of their roles in European history and the activities they develop to highlight their European dimension.

After a series of tough debates, the independent selection panel in charge of assessing the applications on the basis of the established criteria has issued its report in which it recommended 16 sites for the Label. The Commission will take its formal decision by mid-February 2015.