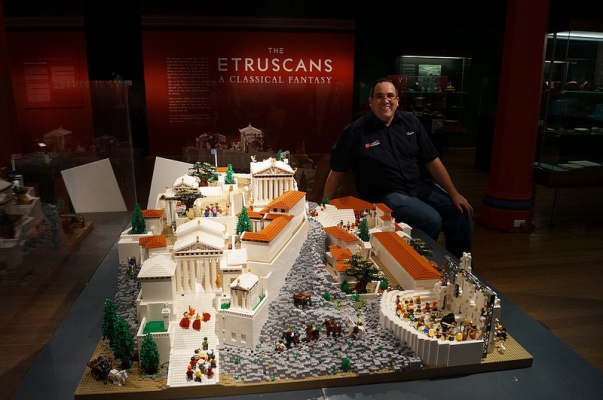 Lego Oedipus, Lego Lord Elgin and Lego Sigmund Freud are arrived to Greece as a part of an extraordinary gift from the University of Sydney’s Nicholson Museum to the Acropolis Museum in Athens.

The figures are a small part of a Lego Acropolis built by Ryan McNaught, the only Lego-certified professional in the southern hemisphere. It contains more than 120,000 bricks and took about 300 hours to build. Faithfully recreated in gleaming white bricks, the model features the Parthenon, the Temple of Athena Nike, the smaller Erechtheion temple and the site’s monumental gateway, the Propylaea.

It also contains hilarious modern and ancient scenes using Lego mini-figures. In the small Odeon, Theseus winds his way through a labyrinth to face the Minotaur. In the Odeon of Herodes Atticus, Elton John gives a concert to modern-day tourists. Lord Elgin and his crew make off with the Parthenon marbles, while Freud, who visited the Acropolis in 1904, looks on.

"There are ancient stories, there are stories from the 19th century, from the modern times, altogether,and this is very good. I think through this way it is easier to make clear the history of the Acropolis," Dimitris Pandermalis, president of Acropolis Museum, said.