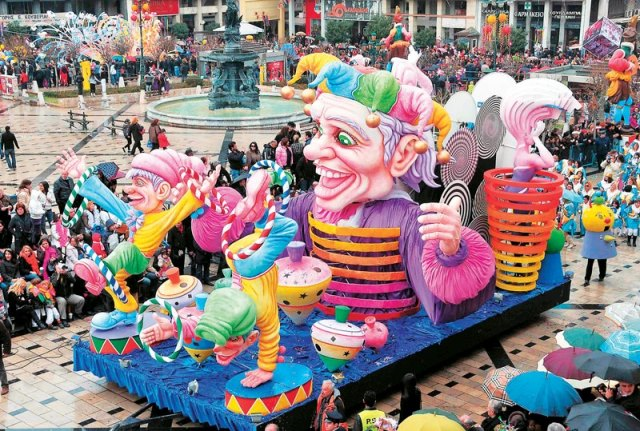 Patras Carnival is the largest event of its kind in Greece and one of the biggest in Europe. It has more than 160 years of history. The events begin on 17 January and last up to Clean Monday. The carnival of Patras is not a single event but a variety of events that includes balls, parades, hidden treasure hunt and the children's carnival amongst others. It climaxes in the last weekend of Carnival with the Saturday evening parade of carnival groups, the extravagant Sunday parade of floats and groups, and finally the ritual burning of the carnival king at the St. Nikolaos Street pier in the harbour of Patras. Its characteristics are spontaneity, improvisation, inspiration and volunteerism.

The soul of the carnival are the tens of thousands of carnivalists, from Patras, visitors and friends of the Patras Carnival, people of every age group who participate spontaneously in the carnival events; the official events and the hundreds of unofficial events such as carnival balls, masqued balls and parties at home, in neighbourhoods, clubs, cafes and restaurants.

The Grand parade is the climax of the Patras Carnival. The parade begins around 2pm on the Sunday before Clean Monday with numerous satirical floats constructed by the municipality followed by an endless stream of groups, each one with an individual theme around which their costumes are designed. Despite the constant flow, due to the number of people participating which in recent years has reached between 35 and 40 thousand, the parade takes several hours to complete. It cuts through the town and is watched by thousands on the streets, on balconies, in the stands and throughout Greece in a televised coverage.

Patras Carnival or Patrino karnavali is special, the energy and participation level lets the Carnival rightly declare themselves as among the world’s greatest Carnivals.