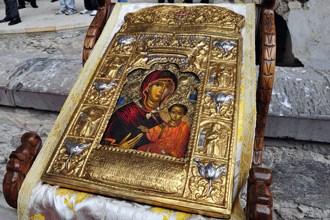 When watching a movie "My Big Fat Greek Wedding" or «Mamma Mia», no one could imagine that the "industry" of marriage will continue to grow in Greece, despite the crisis and other reasons.
According to the British site 101 honeymoons, Santorini is selected as the second best luxurious place for honeymooners in the world and is another indication of the potential of this industry.
"In the early '90s we could have 5 or 6 foreign marriages a year on our island" - says today Giorgos Karagyannis, Director at Astra Suites in Imerovigli Santorini.
"I mentioned American travel agencies, which were the only ones who offered destination weddings», - he explains. - But now it turns out that Santorini over and over again is becoming very popular place for those who want to marry. " Last year, there were registered 1100 marriages on the island. "Landscape plays a great importance for the ceremony."
A package usually includes a symbolic ceremony with a stop in Santorini, hotel booking and dinner. As it turns out, the Greeks are more demanding of food, foreigners - to drinks. However, everyone mostly prefer the local dishes. For example, instead of sangria for a welcome drink is offered ouzo and octopus and other local snacks.
Now, many old customers come to celebrate anniversaries: ten, twenty years back to Santorini! Apparently, the island contribute to the fact that marriages effected here are really strong!
However, apart from the already famous island of Santorini, there are many other places in Greece for foreign marriages: Mykonos, Paros, Antiparos, Milos, Hydra, Spetses, Aegina, Skiathos, Rhodes, Crete, Corfu, Kefalonia, Paxos. Equally popular destinations in mainland Greece: Monemvasia, Nafplion, Halkidiki.
Every island has its own traditions of wedding ceremony. For example, the island of Aegina has a great potential as it is close to Athens and offers lower prices than most of the "famous" islands.
As it turns out later, after the wedding ceremony, there are a lot of couples who are not indifferent to the beauty of the Greek land. Some couples would buy their dream home there!