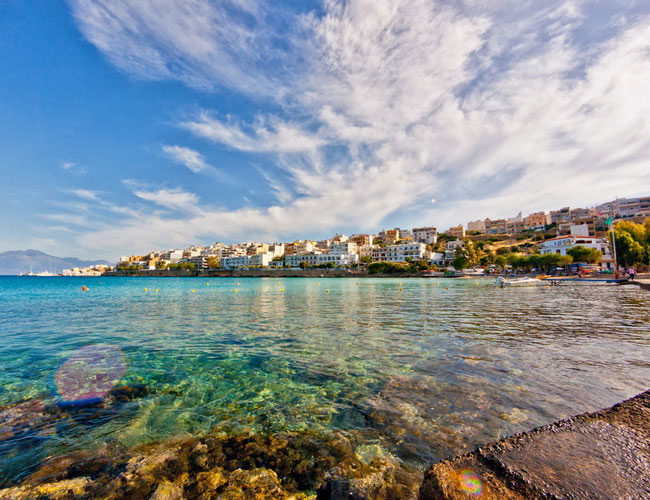 A popular tourist site Culturetrip.com chose 10 of the most beautiful cities that offer the other side of Greece. "Greece is a land with incredible natural beauty, rich history and colorful folklore”.  Everyone can find something just for himself "- the author writes.

A very few cities reflect the rich and diverse history of Greece, as bright as Nafplio, one of the most elegant and romantic corners of the country. Located in the heart of the historic area of ​​Argolis in the Peloponnese, Nafplion has deep cultural roots from ancient Greece and the Venetian period of the 15th and 17th centuries. The city boasts a magnificent neo-classical mansions, beautiful Venetian architecture and picturesque alleys. Two Venetian castles Palamidi and Acronafplia built on two hills are architectural landmark of the city. A small fort Bourtzi, located in the Gulf, a short ferry ride from the city, offers a unique view of Nafplio and is an ideal place for romantic walks.

The quaint town of Parga is the most popular summer destination in Epirus, Western Greece. Located on the slopes of a hill surrounded by lush greenery and beautiful blue sea, the city creates a relaxed resort atmosphere. Visitors can enjoy the charm that creates colorful houses situated on the waterfront and paved areas, as well as to visit the ruins of an old Venetian castle on a hilltop. Nearby beaches are amongst the best in Greece.

The stunning beautiful town of Agios Nikolaos is located on the Gulf of Mirabell on the northeast coast of Crete. The city was named in honor of the Byzantine chapel of St. Nicholas, which was built in the ninth century. Overlooking the sea on three sides, the city has several embankments. The most unusual feature of the city is Voulismeni lagoon, deep lake, which is connected to the sea by a narrow strait. According to the legend, the lake is bottomless. From Agios Nikolaos, travelers can visit the infamous island of Spinalonga (the leper island), a place that served as a leper colony until 1957. Events of this historical fact are described in the novel  ofVictoria Hislop.

With a population of about 12 000 people, a small town of Kalambaka is located in central Greece at the foot of Meteora, a cluster of steep cliffs that host the famous monasteries of Meteora, which are among the UNESCO World Heritage Site. Kalambaka has a rich history dating back to the times of ancient Greece and the Byzantine era, with beautiful Orthodox churches and chapels. Visitors can enjoy hiking through the narrow cobbled streets of the picturesque old quarter of the city.

Treasure of northern Greece, picturesque city of Kastoria is built on a narrow strip of land between the calm waters of a beautiful lake Orestiada, giving the impression of floating islands. The city flourished in the 19th century thanks to the fur trade. Luxury villas of merchants and traditional buildings can be admired in the old quarters and Doltso Apozari, there are 72 churches, evidence of the rich Byzantine past. Hiking around the lake, perhaps, one of the most scenic walks in Greece, offering stunning views of Kastoria and the surrounding mountains.

Widely popular destination for sports enthusiasts and nature is Karpenisi town known as "Little Switzerland", located in a remote and sparsely populated region of Central Greece. The city gained its fame mostly due to the unspoiled natural beauty of the surrounding mountains, forests and rivers. Despite the small scale, Karpenisi offers a decent selection of traditional hotels, bakeries, restaurants, and offers a wide selection of local dishes, including the famous sausage with leek and ham.

Located at an altitude of 1200 meters, in the heart of the magnificent mountain range of Epirus, Pindos, Metsovo, is undoubtedly one of the most beautiful cities in Greece. The city was home to the best masters of the country, who used their rich natural resources of the region in the creation of beautiful mansions, monasteries, fountains and squares, most of which have remained untouched by time. The nearby mountains and hills with pristine forests afford spectacular views for visitors who can enjoy scenic walks in the surrounding area. Despite the rapid growth of tourism in recent years, Metsovo still retains its traditional atmosphere, combining past and present and offering a variety of cultural and sporting events throughout the year.

Old Town Verea is located in northern Greece. Deep-rooted history of the city originates from the ancient Macedonia, Byzantine and Ottoman Empire. Veria offers a variety of cultural and architectural monuments, Byzantine churches and stone paved streets and squares of the times of Macedonia and the Ottoman Empire. Perhaps one of the most interesting features of the city is well-preserved old Jewish quarter and synagogue, the remainder thriving Jewish community before 1940.

Located in Thrace, at the crossroads between Europe and Asia, Xanthi is known as the "city of a thousand flowers." The town owes its popularity to a former tobacco industry and the famous traditional carnival, which takes place annually on each Carnival. Old town of Xanthi is considered an open air museum, presenting a wonderful combination of architecture that reflects the religious and cultural diversity of people living in the city.

The picturesque seaside town of Galaxidi is located on the northern coast of the Gulf of Corinth, in central Greece. Ancient rich and busy port, Galaxidi managed to keep most of the glory of naval history, and most of the maritime museums. City is popular for its yachting tourism. Embankment and colorful streets are decorated with beautiful two-storey buildings and traditional Greek tavernas.