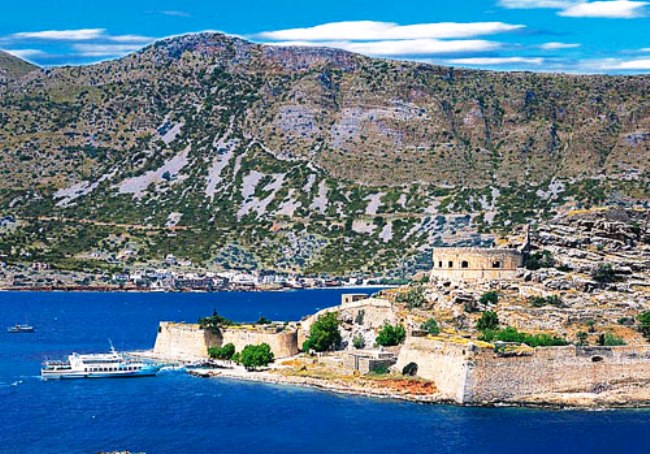 Only 10 km from Agios Nikolaos lies the Bay of Elounda. The Bay is known for its majestic, luxurious hotels and here is where the elite of the international firmament  sojourns in style in private villas and suites. However the small harbor of Elounda reserves still strongly color the old charm, with some cafes and taverns along the beach. Spinalonga Island (also known as Kalidon) is a small island located directly across from the coast of Elounda and Plaka, the Bay of Mirampelo. During the 1200 the Venetians built huge fortifications in this Rock-Island to protect the entrance to enemies at Bay and the fortifications still dominate in North side of the island. From 1903 until recently, in 1957, the island of spinalonga, was a leper colony, resulting in lepers from all over Greece to be sent to the island. The suffering of lepers who resided on the island of Spinalonga, which was photographed in extremely commercially successful Victoria Hislop's book "the island".Today, the island of spinalonga is uninhabited, but can be visited by a short boat trip from Elounda (30 minutes), slate (15 minutes) or Saint Nicholas (1 hour). Following the path around the island, the visitor is led through a street at a whopping point, marked by stone ruins of buildings, abandoned forts and the local cemetery.