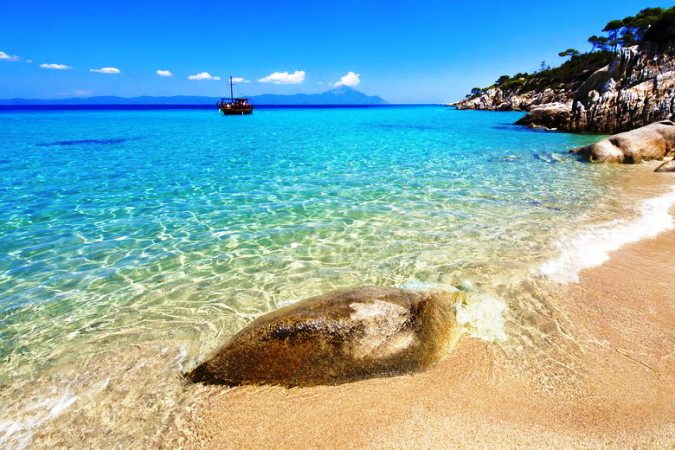 1. Super Paradise Beach, Mykonos: Mykonos beaches have earned a reputation of the best beaches in the entire Aegean Sea thanks to the crystal-clear, turquoise waters and shorelines with the golden sand beach that offers services of many stars. One of the most impressive is the Super Paradise. A huge Sandy Cove with transparent green and turquoise waters. Once you have made the first dive and open your eyes in the water, you'll understand why belongs to the most beautiful beaches of Greece.

2. Beach of lalaria, Skiathos: A hallmark of the island, with beautiful natural scenery, deservedly won the title of the most beautiful Beach, which became known to the ends of the Earth. Green waters, white pebbles and towering, craggy cliffs attract dozens of boats with guests, who are quick to see the incredible scenery.

3. Sarakiniko Beach, Milos: White volcanic rocks, soft as chalk, with shapes that resemble sculptures. A deep Bay with green water, as both acquire deepens shades of blue. Sarakiniko beach is a true phenomenon.

4. Beach Kolymbithres, Paros: the famous beach in the Bay of Naoussa has wonderful turquoise waters, sandy coves and grayish rocks sculptured by the wind and the waves.

5. Navagio Beach, Zakynthos: who would ever have thought that an old boat named "Panagiotis ' I starred in thousands of photos and videos that showcase the Zante in all over the world. The beach where it ran aground, is a stunning backdrop with vertical white cliffs, the turquoise waters and white sand. They see – from the sea, if you come by boat or from the top of the escarpment-will cause you wonderment.

6. Myrtos Beach, Kefalonia: near ACE and just 30 km. From Argostoli will experience the most famous beach of Kefalonia, one of the most beautiful of Greece. White sand and small pebbles, deep blue waters and steep cliffs, that sponsor, creating an awe-inspiring landscape are hardly forgotten.

7. Canal D'amour Beach, Corfu: between Sidari and Peroulades stretches the impressive landscape with the turquoise waters, white cliffs-sculptures, caves and small beaches. The Channel of love, where legend has it that anyone who swim in the narrow passageway, forming the opening in the rock, will meet on the other side of the love of his life.

8. Beach of Porto Katsiki, Lefkada: Porto Katsiki, the imposing rock of dyed Orange at sunset, has been voted as one of the six best beaches of the Mediterranean.

9. Beach of Balos, Crete: Admire from near one of the most exotic beaches of Greece, which is considered among the best of the Mediterranean, Balos in Chania Prefecture. The sand here shines with White and Red hues. The waters more compete amazing shades of blue and green, while the island of gramvousa on the Venetian castle makes the scene even more magical.

10. Voidokilia Beach, Peloponnese: H Photo of Voidokilia, in Messinia in the Peloponnese, has made the round of the world. The Chamber, forming the white sand surrounding the impressive blue, green waters, seems to have done with compass. The unspoiled nature, which surrounds it, is another reason why it is ranked in the most beautiful beaches of Greece.