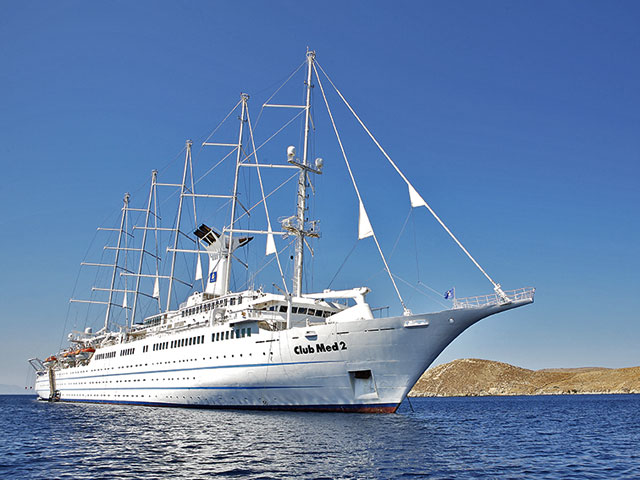 This weekend at the port of Chios in the Aegean Sea threw anchor the largest sailing vessel in the world and one of the most famous cruise liners Deluxe-Club Med 2.

The ship was redirected to water in Le Havre (France) in 1992, and six years later the company sold Windstar Cruises.

Club Med 2 is equipped with a computer controlled sailing system with conventional propulsion. The vessel is equipped with outriggers, sustainability is therefore usually pitching is virtually non-existent, all passengers can enjoy the serenity of the marine stroll.

The ship had five masts and 5 triangular sails. In the morning the ship moves with the aid of the engine, and in the evening, uses sails. On the ship-186 cabins, 10 of which refined design (115 square meters each) and cruises in the Mediterranean and Cyprus.

«Poetic scenes and stories inspired by stories about the sea and travels, reflected in the intimate atmosphere of a sailboat. For example, the Interior of the bar "Moby Dick" was inspired by the famous Hero of Melville. Whale tail bends around the bar and extends, as a sign of appreciation for the traditions of shipbuilding. "

Luxury sailing ship with the flag of France, arrived at Chios, passage to the picturesque Santorini, carrying 308 people (mainly European tourists), the next stop will be of Lemnos.