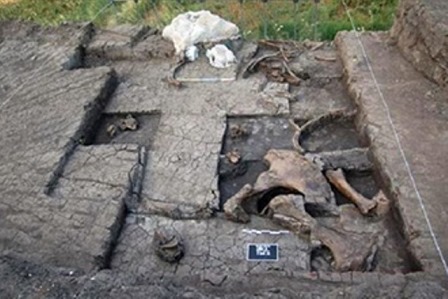 Almost the whole skeleton of an ancient elephant track, as well as rich fauna (remains of rodents, birds, amphibians and reptiles) and Flora (pieces of wood, nuts, from the Lower Paleolithic era) were found in the area Megaloupoli, Arcadia (Peloponnese).

During the excavation works carried out on site Marathusa 1, near the bones of elephants and other mammals have been found stone artefacts dating back to the preliminary data from 300000 to 600000 years ago.

How to show the first results of the excavations of Paleolithic humans produced stone tools at the site suitable for skinning and butchering of the elephant. Traces of stone tools have been found in the bones of the elephant, which suggests that Marathusa was place of slaughter of animals.

Excavations on the site of Marathusa  are extremely important from a historical point of view, allowing you to understand much of distant prehistory of Europe.