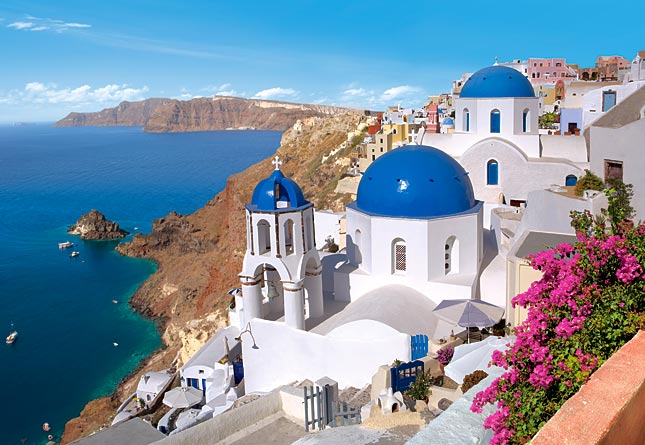 Greece is one of the most popular tourist destinations in the world. In this country there is certainly a great variety of tourist attractions that can tirelessly explored.

The site touropia.com offers 10 most popular.

Santorini is famous for its breathtaking views, unique sunsets, white houses and an active volcano.

The Parthenon atop the Acropolis is one of the most famous tourist attractions in Greece, and Athens visit would not be complete without a visit to the Acropolis.

Mykonos is the most cosmopolitan Greek island is recognized as one of the best tourist destinations in Greece.

The spectacle of the monasteries located on the tops of spectacular cliffs, is really staggering. The first monastery of Meteora was founded in the 14th century. Access to the monasteries was intentionally difficult.

In ancient times, Delphi were the most important place in ancient Greek religion, there was the famous Oracle of Apollo. The ancient theatre at Delphi was built on a hill, revealing views of all the sanctuary and surrounding spectacular landscape.

The beach of Myrtos in Kefalon′e is famous all over the world the magic touch of water. Already 12 times Myrtos has been voted the best beach in Greece.

Lindos is a medieval village on the island of Rhodes, which consists of a network of cobbled streets between the belënymi houses. Above the town rises the Acropolis of Lindos, with stunning views of the Harbour and surrounding coastline.

Located not far from ancient Sparta, Mistras was the capital of the Peloponnese in the XIV and XV-th centuries.