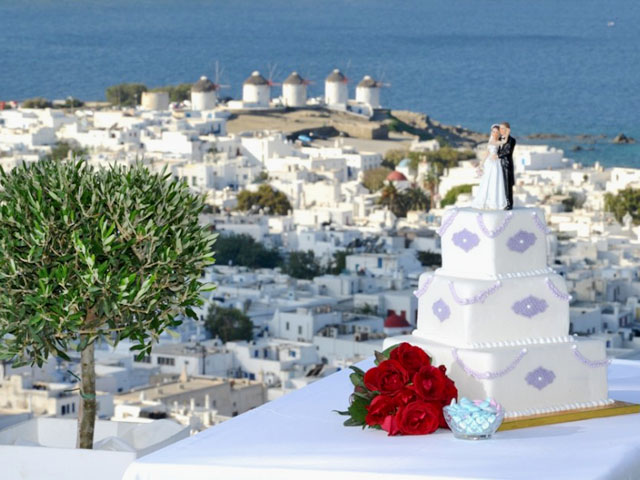 Today, in times of crisis, the most profitable investment in Greece are wedding magnates. Prices start from million euros. Who is this "Golden couple", which exchanged vows of eternal love in the Hall with a magnificent design, similar to the city Palace, the most famous Greek island.

Chic wedding last year by Leonid Fotinopulosa and citizen of Lebanon-Tamara Zane, which cost 5 million euro, shocked the public and received a lot of publicity. This year, a few weeks ago held no less opulent Indian Wedding couples on the island of Mykonos. The Hall, decorated with Indian-style, countless guests in national clothes, girls in ancient Greek costumes and Greek dances, all this memorable public and leave this wedding in history. Pair of Aditya, the son of Patek Indian banker and Malliki Tarkas became famous.

At the wedding were invited not only the relatives of both sides, but also managers and shareholders of major companies such as Blackrock holding Piramal and Jet Airways. Wedding table decoration, luxuriant amazed with the variety of dishes and gold-plated cutlery. Organization of wedding Indian company engaged in Backstage Productions Ltd. More than 30 staff were brought in the best fabrics for decoration of the Hall in blue and yellow tones and invited photographers and musicians.

The famous Indian couple often vacationed in Mykonos and, therefore, decided to arrange a lush ceremony on this island. The celebration lasted three days. Detailed event received extensive media coverage in India. This "fairy tale," the father of the groom cost 2 million euro.