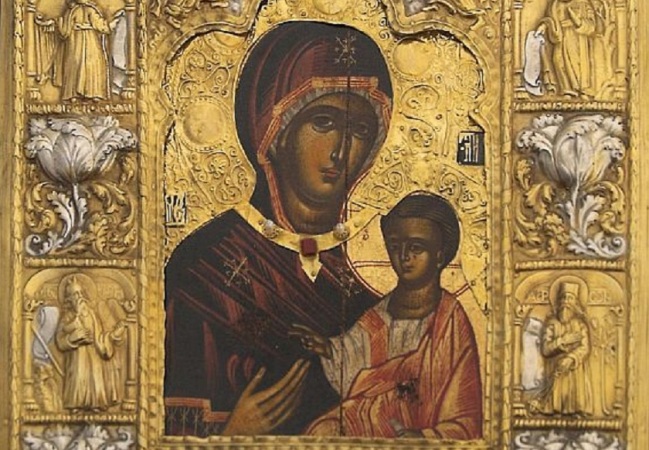 The Holy image of the mother of God, Panagia Sumela will arrive on Wednesday, 18 November, at 5:00 pm, in the chapel of our ‘’Lady of Nerantziotissa’’, located in the District of Athens Marousi.

From the corner of Nerantziotissa and Agios Konstantinos, where there is a chapel, a procession with a Holy image followed by the Church of the Holy (agio) Cosmas Aitolos, where the image will be stay until the morning of 23 November.

In accordance with the programme, 22 November, at 1 p.m. near the Church (St.Vizantiu), will take place of Pontus open-air celebration with singing and dancing, while on the following morning the icon of Panagia Sumela after morning service go to the monastery on a mountain Mount Vermio in northern Greece, where it is stored.

Church of St. Cosmas Aitolos in Marousi is located at the junction of Vizantiu and Marafonodromon. It's easy to get to via Skytrain-ΗΣΑΠ or suburban commuter trains (stop Nerantziotissa).

According to the legend, the miraculous image of the Theotokos Panagia Sumela was written by the Apostle Luke. "Managed" is derived from the name of the mountains of chalk and the words "su", meaning the Pontic dialect "in" or "on". So Su- Mela "translates to" Mela "on the mountain, and is the mother of God Sumela on Mount chalk. After the death of Apostle Luke icon brought to Athens, Temple, built in honour of the Virgin Mary, his disciple Ananias. There the image remained until the end of the 4th century. In the year 386 Athenian monks Barnabas and Sophronius founded a monastery on Mt. Mela in Trapezounda, where until the eviction of Greek Orthodox population of Anatolia have lived hundreds of monks and hermits.