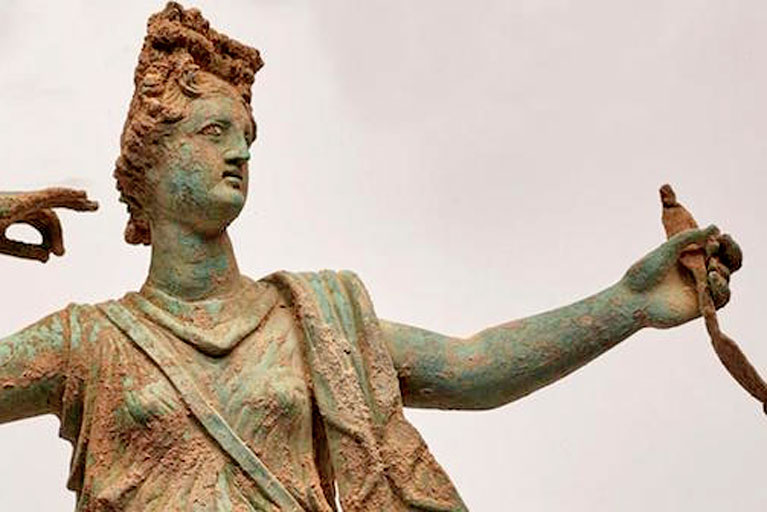 Two very well preserved statuettes depicting the Greek gods Artemis and Apollo have been discovered in the ancient city of Aptera, Crete. The sculptures, which date to the first or second century AD, would have been imported to Crete and used to decorate a shrine in a luxury Roman home, the Greek Culture Ministry announced.

Both statues stand at around 54cm in height, with the base measuring around 35cm. The one of Artemis is made of copper, while Apollo is sculpted from marble. They were found during an excavation of the archaeological site led by Vanna Niniou-Kindelis, director of excavations at Aptera. The ministry describes Artemis as being in an excellent state of preservation. She is wearing a tunic, with her stance showing her preparing to shoot an arrow. Artemis was the daughter of Zeus and Leto and was the twin sister of Apollo. She was the goddess of chastity, virginity, hunting, animals and the wilderness – she is often depicted with a bow and arrows. The sculpture of Apollo is simpler, but nevertheless was carved with excellent artistry. Notable of this statue is "rare preservation" of the red dye in the brackets – the sculpture would have been painted.

Aptera is in western Crete. The name comes from Greek mythology – it was the site of a contest between the Sirens and the Muses. The Sirens were defeated and as a result lost their feathers and cast themselves into the sea. Aptera means "without wings". It became a prominent city in the third century BC but was destroyed by an earthquake in the 7th century AD. The archaeological site is now run by the Greek Culture Ministry and it includes a monastery, Roman baths, a cistern, several temples, a theatre and a villa.