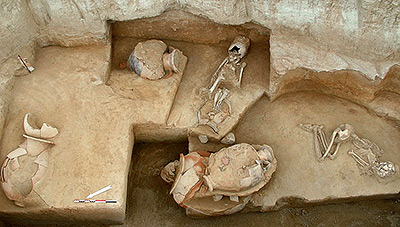 Excavation in the area of the Municipal Park

An excavation was conducted, during construction of the Municipal Sports and Leisure Park at the Municipality of Kallithea (July 2011-August 2012), by the 26th Ephorate of Prehistoric and Classical Antiquities, under the supervision of archaeologist Eirini Skiadaresi. The excavation identified parts of an ancient road, which dates to the archaic period, specifically between the late 7th and the early 6th century BC.
Traces of a viaduct were also found, which served the seamless continuity of the road over the stream whose banks have been shaped with retaining walls. Workshop facilities were identified in the area of the viaduct, which were intended for the treatment of porphyra (imperial dye) which was obviously harvested in the adjacent Faliro bay. A well was found in the same area, lined with two rows of clay rings with engraved letters and symbols, the binding of which was made by using lead joints.

During construction of the Stavros Niarchos Foundation Cultural Center (SNFCC), a second excavation took place (April 2012-December 2013), under the supervision of the director of the 26th EPCA, Dr. Stella Chrysoulaki, and archaeologist Eirini Skiadaresi. In an area of approximately 3000 m2, specifically in the part of the site where the artificial hill and the channel will be constructed (drawing 1), a large ancient cemetery was revealed, parts of which had been excavated before, by the Greek Archaeological Service at the beginning of the last century.
The cemetery was used for a large period of time, spanning almost three centuries, from the late 8th to the early 5th century BC. Its size, density and long period of use, favorably point to its characterization as one of the most significant necropolis in Attica during the Archaic Period.
A total of 1,069 burials have been excavated, of which 587 are dug into the soft sandy soil (pit graves), 358 are pot burials, i.e. of infants and young children in vases, and 88 are funeral pyres. They also include 11 larnaxes, 9 cist graves (box-shaped), and 15 animal burials. One of the major findings was a wooden box, used as a coffin for the burial of a young person. The coffin, made from a single piece of wood, had been carved into a tree trunk, and was found in excellent condition. The preservation of such a large wooden object is extremely rare and is due to the specific conditions of the Faliro Delta region.
The taphonomy of the cemetery is characterized by the significant density of the graves, both in surface covered, as well as in depth. Continued use of the cemetery within consecutive historical periods is not demonstrated in the excavation by corresponding successive layers. Lastly, the burials do not follow the same orientation, while, even the positioning of the dead varies significantly.
Most objects serving as grave goods were ceramic, with only a few exceptions, therefore pottery played the most significant role, regardless of the age of the deceased. All known styles are represented (Late Geometric, Protoattic, Black-figure), with products of Attic workshops dominating. The predominance of Corinth, with regard to imports, is also confirmed here. Furthermore, the presence of a significant number of vases/pots imported from eastern Greece and Euboea suggest a more developed commercial network in Attica, and is not circumstantial.
One can easily identify known painters, workshops, groups, imports and imitations, but also some unusual pictorial scenes, such as the black-figure representation of a fallen rider on a lebes gamikos (nuptial lebes). The ancient cemetery of Faliron hides many such little surprises: an indicative example is a prothesis scene on a black-figure plate, of which survives only the head of the deceased on the funeral bed and two women mourning.
Both the archaeological and the anthropological study of the material are at a very early stage, since the mandatory maintenance tasks have not been completed yet, and the necessary analyses have not been initiated. It is, however, possible to provide a first estimate based on data such as the posture/positioning of the deceased, the conservation status of the skeletons, but also on information such as gender and age, where possible. According to this primary estimation, the absence of a large social stratification, the high rate of child mortality, as well as signs of pathological conditions or traces of arduous daily work evident on skeletal material, point to a population which constituted, in its majority, the basis of the social scale in Attica during the Archaic period.
Additionally, for understanding the cultural parameters surrounding death rituals, the grave goods have no meaning when disconnected from the dead. The customs of burial and funerary offerings reflect the values and perceptions of the living and can therefore act as a guide for an interpretive approach to the social group in Faliron.