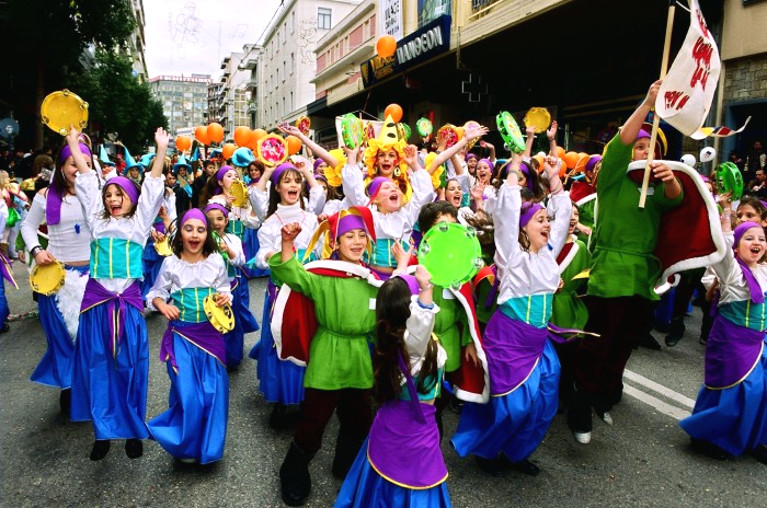 The Carnival season, or “Apokries” in Greek, is slowly coming to an end this weekend, but not without a bang. Greeks across the country are going to celebrate the last days of freedom before the Greek Orthodox 40-day Lent Season that leads to Easter.

Different customs and traditions will take place in each Greek city this weekend, with the most spectacular feast taking place in Patras. Carnival season is a grand celebration in the Peloponnesian city. Thousands of locals and visitors gather each year for the spectacular chariot parade that takes place on Sunday morning and the burning of the Carnival king in the evening.

Furthermore, the Carnival in Xanthi, northern Greece, is also a huge event that offers an unforgettable experience for any lucky visitors. The event focuses on local traditions and folklore with just a touch of modern influence. People roam the city streets disguised, playing pranks on each other and having a good time. Over 40 cultural associations participate in the Carnival program, offering wine and local delicacies to guests.

In Galaxidi, central Greece, people gather for the Flour Throwing Festival. Every year, the small harbor town organizes the traditional flour battle, where more than 1.5 tons of colored flour is used as a “friendly” weapon against locals and tourists who attend the insane event. What starts as a war, ends up being a fun party with people running and dancing in the streets, throwing flour in the air and creating a colorful atmosphere.

These celebrations lead up to Clean Monday (“Kathara Deftera”), the first day of the Greek Orthodox Lent. The common term for this day, “Clean Monday,” refers to the leaving behind of sinful attitudes and non-fasting foods. Clean Monday, also known as koulouma, is a public holiday in Greece and Cyprus, celebrated with outdoor excursions, the consumption of shellfish and other fasting foods, a special kind of azyme bread, baked only on that day, named “lagana,” and the widespread custom of flying kites.

The meaning behind the kite custom remains unclear to this day. Some claim it has Asian origins and was passed on to the west over the centuries. People would write wishes on their kites and fly them as high as possible so that the gods could answer them. Others suggest that ancient Greek mathematician Archytas of Tarentum (440-360 BC) was the first to design and use a kite in his aerodynamics experiments, and there is evidence from pottery dating back to the classical period showing a young woman holding a kite.

However, flying the kite and enjoying delicious lent food is not the only Greek custom on Clean Monday. In Thebes, locals perform the “Vlach Wedding,” a custom that dates back to 1830 and refers to the matchmaking of the time. Today it is revived with the shaving of the groom and the bride’s preparation for the wedding, but there is a twist! The bride is actually a man disguised. In the meantime, everyone celebrates koulouma by singing satirical songs and dancing.

In Vistonida, northern Greece, festivities start from the previous day with the preparation of lagana and bean soup (fasolada) by local women. On Clean Monday, visitors will be surprised to find two disguised men (mountzourides) whose goal is to rub coal on the faces of guests. The coal comes from the fire used to boil the fasolada.

Finally, on the Greek island of Chios, locals revive the “Aga” custom that has its roots in the Ottoman occupation and remains to date a very funny and unique tradition that entertains residents and visitors of Mesta, Chios, every year. The Aga and his followers invade the village and move to the central square. There, he gathers the people and puts everyone to trial for various misdeeds attributed to them and makes them pay the appropriate fine. The money collected from the fines goes to the fund of the village’s cultural association.