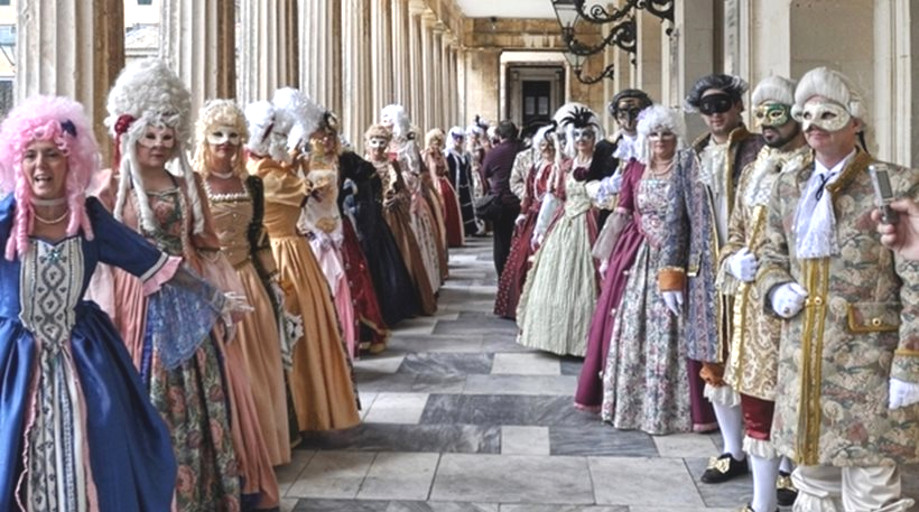 Corfu will be transformed into a 18th century Venice for the Carnival season once again and the island will be full of counts, dukes, duchesses, drummers, courtiers, ladies of honor and all the characters from the baroque period.

The famous Carnival of Corfu counts almost 450 years of existence and has its roots in the Middle Age, when the island’s Venetian conquerors brought the custom from their hometown.

The most famous happening of the Carnival is the big parade taking place on the central streets of the city. Another custom is the enactment of the “Petegoletsia,” a word standing for “gossip” in the Corfiot dialect. Resembling a street-theater performance, actors sit on window-sills overlooking the narrow alleys of the old town and exchange gossip in local dialect, usually revolving around ongoing developments in the island’s political and social life.

As years went by, local characters, themes and Greek customs have been incorporated in the celebration. The theme of “Tsiknopepmpti”, the Thursday when everyone eats lots of grilled meat, treasure hunts, political satire and other themes and characters has featured in recent carnivals.

The carnival events in Corfu will last all next week with gusto, colorful characters, parades, Venetian traditions, and will culminate in the burning of “Sior Carnival”, meaning Mr. Carnival. According to the custom, Sior Carnival will read his will in front of the notary and witnesses and then Corfiots will burn him.