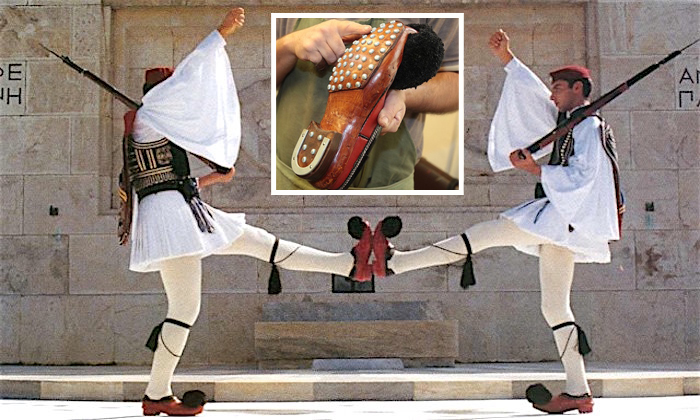 When one thinks of Greece’s War of Independence in 1821 and the great heroes like Kolokotronis and Karaiskakis, they would inevitably think of the foustanella, the skirt-like garment, and the tsarouchi, the typically-Greek shoe with the big round tassel on the tip.
The tsarouchi is a lightweight leather shoe worn by villagers in mainland Greece until the end of the 19th century. Yet, the Greeks added more significance to the design after the liberation from the Turks. For instance, the tassel on the tip symbolizes the small tree of liberty and inside the tassel there is a blade that symbolizes the kick that the brave man who wears it will give to every enemy who dares to hurt the little tree of liberty, and if the blade is real, then it becomes a good hidden weapon for close combat.
Today the rustic shoes are part of the uniform of the Evzones, the select guards of the President and the Presidential Mansion. In this case though, on the bottom of the tsarouchi an evzonas is wearing carries about 50 nails, something that makes his gait more imposing and threatening.
Tsarouchi as a chic item
Today the tsarouchi is a cherished folklore item. Yet, it can also become a chic item. Greek designer Efi Pantazi took the tsarouchi design and gave it a spin, without sacrificing any of its “Greekness.”
For those busy souls who want an added “Greek touch,” a major accommodation can be online shopping. EFI Store, Doromu.com, and Easy.com offer a wide selection of “Greek Tsarouchi” bracelets and necklaces at affordable prices. All jewelry is hand-crafted and can be shipped worldwide.