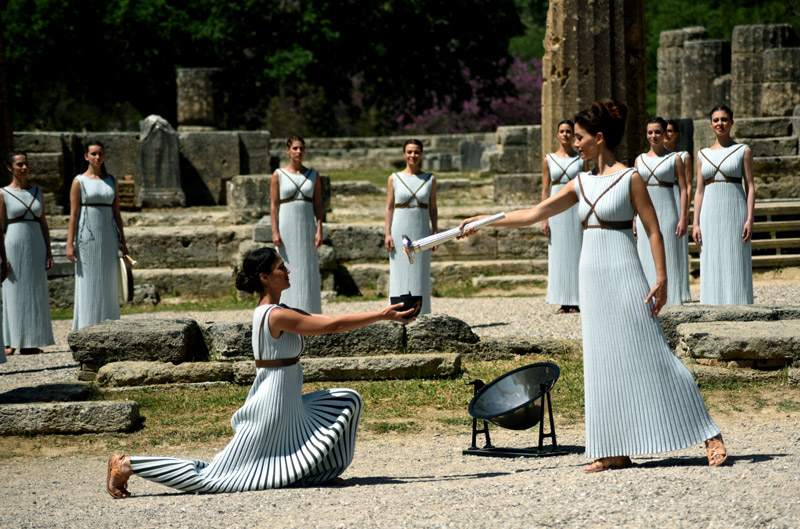 The Olympic flame for the 2016 Rio Games has been lit in ancient Olympia in Greece on Thursday, launching the torch relay for the first-ever South American Games.

In a bright ceremony, the flame was lit by the sun in the Temple of Hera in Olympia, as per the ancient tradition. Then it will travel through Greece for a week before beginning its full journey to Rio.

Greek actress Katerina Lehou, in the role of the High Priestess, lit the flame using a parabolic mirror in the heat of the midday sun. Gymnastics World Champion Lefteris Petrounias is the first torch bearer who will relay the flame.

“With huge emotion and energy, we are here today in the Olympia holy land of the Olympic games. The Games start today with the lighting of the flame,” Carlos Nuzman, president of the Rio 2016 organizing committee, said.

“It’s our honor to lead this dream — the Rio 2016 Olympic Games. The first in our country, the first in South America, the first in a different region of the world. You’ll remember this moment forever, for centuries,” Nuzman said.

International Olympic Committee president Thomas Bach said the Rio Games would go ahead “in a world shaken by crises” but added that “these Olympic Games will be a message of hope in troubled times — and the flame will carry this message into all corners of Brazil, and indeed, all the world.”

President of the Hellenic Republic Prokopis Pavlopoulos was present at the ceremony. This year is the 120th anniversary of the launch of the modern Olympic Games.