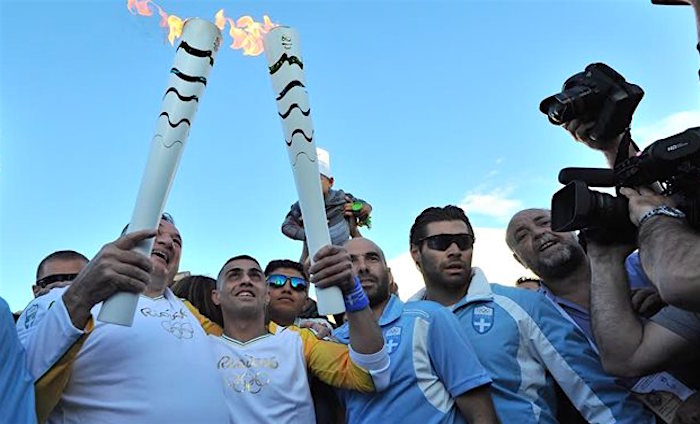 A 27-year-old disabled Syrian refugee received the Olympic flame on Tuesday at the Elaionas refugee camp in Athens.

Ibrahim Al-Hussein received the torch by head of the Hellenic Olympic Committee Spyros Kapralos, thus representing tens of thousands of refugees in Greece in the torch relay.

“I have been an athlete for 22 years, and tomorrow I feel I will have made it, reaching the actual Olympic Flame,” Al-Hussein told The Associated Press on Monday. “It’s a great honor and pride for me to carry the Olympic Torch … and the pride is not only for me but for all Syrian migrants who came (to Europe),” he said. “But I’m not just a refugee, I’m an athlete too.”

According to the International Olympic Committee, the torch relay by migrants is a symbolic gesture of support to victims of the global refugee crisis. The committee will allow a group of 5-10 refugees to compete at Rio de Janeiro in the summer, marching behind the Olympic flag.

“I want to go to Rio, but I can’t,” Al-Hussein told the Associated Press.

The 27-year-old athlete lost part of his right leg to a bomb in 2012, during Syria’s civil war that destroyed his hometown. He fled to Turkey, and crossed from its coast to the eastern Greek island of Samos in early 2014 in a rubber boat. Unlike most other migrants who chose prosperous central and northern Europe, he chose to stay in crisis-stricken Greece, where he received asylum, according to the AP report.

Al-Hussein now lives and works in Greece. He swims three times a week and plays basketball in a wheelchair five times a week with an Athens club — and has learned to speak and read Greek. He works at a cafeteria, where his shift usually stretches to more than 10 hours. He says he is not planning to return to Syria, even if the war ends.

“I like Greece, the people and the place. And I don’t want to sit around at home, I like being an athlete and working,” he said.