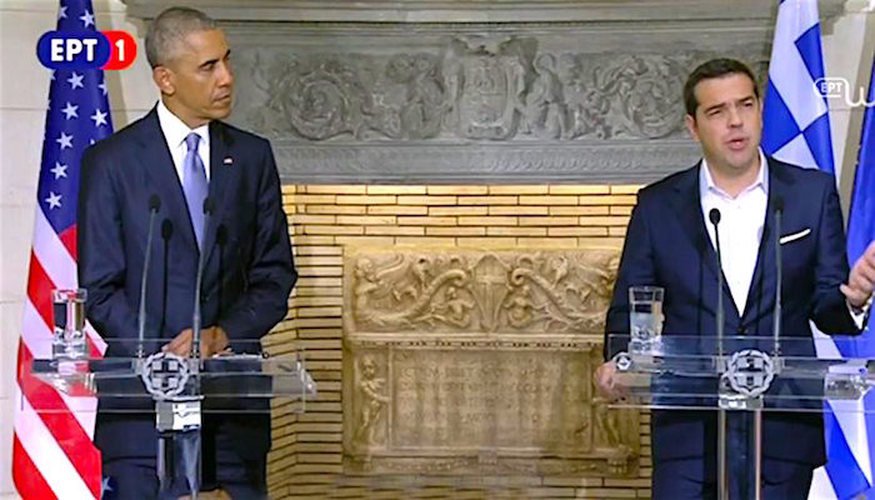 United States President Barack Obama was officially received outside the Greek presidential mansion by Greek President Prokopis Pavlopoulos for their meeting at 1:30 p.m. An hour later, Obama walked across the street to the Maximos Mansion, the prime minister’s official office, and met with Greek Prime Minister Alexis Tsipras to discuss three crises Greece faces — refugees, debt and security in the region.

Obama thanked the Greek people for welcoming him to “the birthplace of democracy,” while Tsipras said that it was this democracy that Greece has been struggling to defend, despite adversity over the past five years. The two men continued the rest of their meeting behind closed doors, accompanied by U.S. Treasury Secretary Jack Lew, National Security Advisor Susan Rice, senior director for European affairs Charles Kupchan and the new U.S. ambassador to Greece Geoffrey R. Pyatt.

They emerged from the meeting after an hour to make joint statements, with Tsipras thanking Obama for choosing Greece as his first stop on his last European tour and pointing to the U.S. President as a man who turned around the U.S. economy in 2008 by using a different route to the one chosen by the EU and bringing on development by focusing on employment rather than EU obsession with austerity that has trapped economies, leaving them stagnant. The Greek PM said that the two men discussed the challenges that the EU is facing and agreed that modern societies should be given hope as the only response to skepticism. The Greek leader said that Greece is slowly returning to normalcy and acknowledged the moral and practical assistance by Washington to the Greek government in the summer of 2015.

Tsipras said that the US acquiesced to debt relief for Germany in 1953, and now that Germany is Europe’s economic engine, it should do the same for Greece as problems have exacerbated for the country due to austerity with a quarter of its GDP lost.

“We’ll continue to promote reforms that promote growth,” said Tsipras, adding that the main field of interest was to unburden the weaker strata of society, especially younger generations that cannot tolerate more austerity after seven years. He emphasized the need for debt relief, lower primary budget surplus targets after 2018 and inclusion in the QE program that he said are deserved by the country.

The Greek leader underlined the importance of bilateral ties with Turkey based on mutual respect. He discussed a viable solution for Cyprus that would be of benefit to both sides on the island.

Addressing journalists, Obama referred to the effects that the economic crisis has had on Greece. He said that he discussed steps that the United States would take to end the crisis and boost the Greek economy.

Obama pointed to Greece as an old U.S. ally, congratulating the country as one of only five NATO members that spends more than 2 percent of their GDP on defense.

He praised Greek islanders for their humanitarian assistance to refugees in what he described as an international problem and referred to the EU-Turkey deal to help alleviate problems.

He said that one lesson from his administration’s efforts on the economic front is to combine fiscal policy with growth policy, adding that the dollar was an advantage for the United States as the world’s most widely traded currency helping it to emerge more quickly from the crisis.