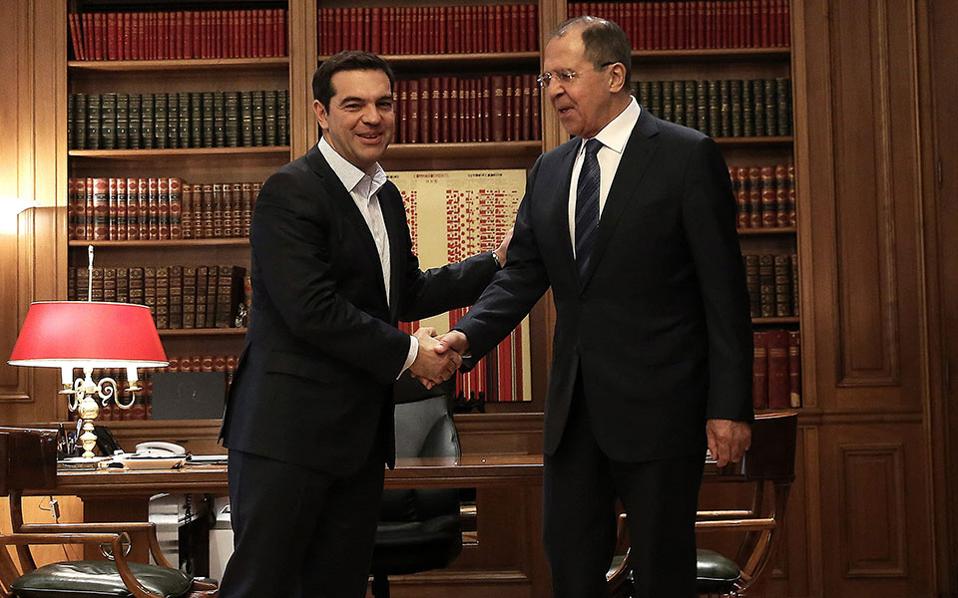 Russian Foreign Minister Sergei Lavrov reiterated the good prospects for the Greece-Russia cooperation in the energy sector during his meeting in Athens with Prime Minister Alexis Tsipras on Wednesday morning.

Lavrov also referred to problems existing in bilateral trade and the efforts of the Joint Ministerial Committee to overcome them and increase trade deals.

The two men also discussed the Cyprus issue, with the Russian politician saying that, as in the case of Syria “the main thing is to implement the resolutions of the UN Security Council.”

“We are firmly committed to the principles necessary for Cyprus and against the revising of these principles and the artificial deadlines given for settling the issue,” the Russian Foreign Minister said.

Prime Minister Alexis Tsipras told Lavrov that, “Your presence here signals the need to maintain the close Greece-Russia relations,” adding that it is necessary that equally close ties between Russia and Europe should be established in order to have peace and stability in the wider region.

“You know better than I that we are in the midst of a period in which we face parallel challenges both in terms of the refugee crisis, terrorism and should seek joint constructive solutions and these solutions will only come from public dialogue. I believe that the coming years are years of close cooperation between the two countries,” Tsipras said.

Prior to his meeting with the prime minister, Lavrov met with President of the Republic Prokopis Pavlopoulos at the presidential mansion where they discussed the Cyprus issue and the war in Syria.

After the meetings with Tsipras and Pavlopoulos, the Russian foreign minister visited Zappeion, where the Greek-Russian Forum is taking place.

In his brief address to the forum, Lavrov emphasized the role of civil society in the deepening of bilateral relations, prospects of economic cooperation and the historical ties between the two countries.

A special mention was given to the fact that next year it will be the 190th anniversary of the Sea Battle of Navarino, where the Russian fleet aided in the liberation of Greece from the Ottoman Empire.