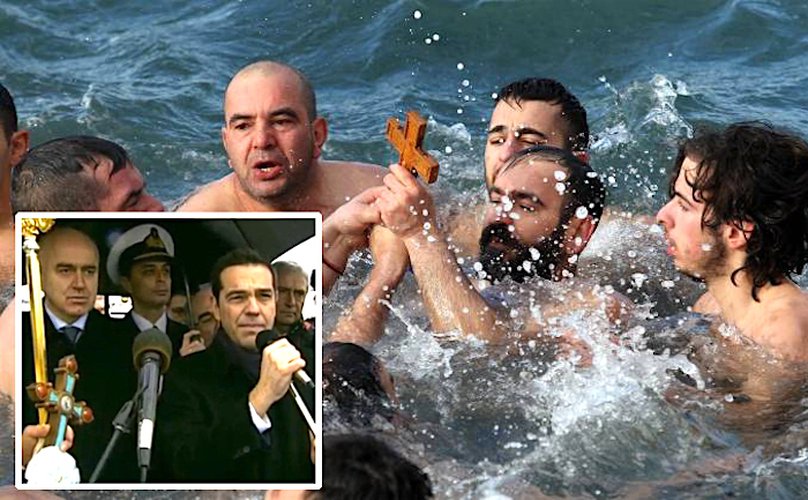 Greek Prime Minister Alexis Tsipras was the person of honor in the ceremony of Epiphany in the port of the northeastern city of Alexandroupolis on Friday.

Archbishop of Alexandroupolis Anthimos cast the holy cross in the water and dozens of men jumped in the icy Thracian waters to revover it.

The ceremony took place under torrential rain and harsh cold. The sacred procession of the holy cross began at the Saint Nicholas church and ended at the port, where Archbishop Anthimos sanctified the waters.

The prime minister said that Alexandroupolis is “the easternmost major port of the European Union” and expressed his wish for it to become a big commercial center in the region.

“We send a message of friendship and cooperation with all peoples, because Greece is a beacon of values such as peace and cooperation and is a pillar of security and stability, but at the same time we declare our determination to defend our sovereignty, based on international treaties,” Tsipras said.

The Epiphany ceremony of the sanctification of the waters and the diving for the holy cross took place in all major ports and lakes throughout Greece.

Epiphany (or Theophany) is the celebration of the revelation of God in his Son as human in Jesus Christ. In Greek Orthodoxy, Christians commemorate the baptism of Jesus in the Jordan River, seen as his manifestation to the world as the Son of God. Hence the casting  of the Holy Cross in the water and its recovery.

In Western Christianity, the feast commemorates principally (but not solely) the visit of the Magi to the Christ child, and thus Jesus’ physical manifestation to the Gentiles.

Watch below a video from Oraioi in Evia with the traditional recovery of the holy cross from the sanctified waters.