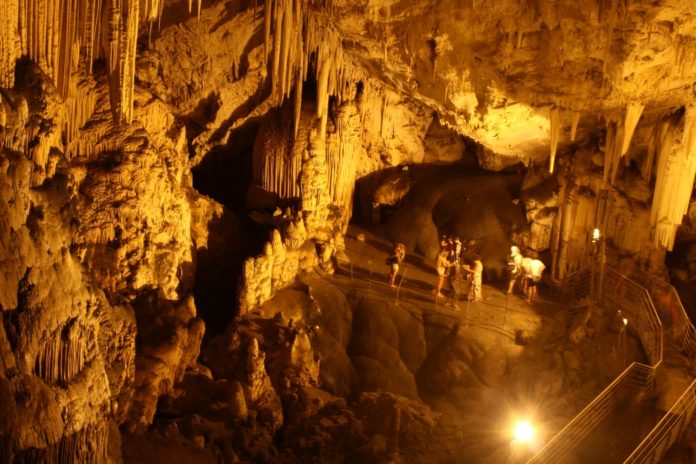 Antiparos is a small Greek island in the southern Aegean, in the central Cyclades. It is only a stone’s throw from Paros which is where you can access the ferry to cross to the quaint island.

There is a lot that can be said about the island of Antiparos, but for now, let’s focus on one natural wonder that has been enchanting visitors to the island for centuries — the Cave of Antiparos.

The cave is situated on the southeastern side of the island on the hill of Agios loannis. The entrance to the cave is guarded by a small 18th-century church called Agios loannis Spiliotis (Saint John of the Cave). This cave which sits some 177 meters above sea level is internationally famous and it is believed to be the oldest cave in Greece dating back some 45 million years. In fact, it is believed that the very first visitor to the cave was Archilochus, a lyrical poet from Paros, who lived from 728-650 BC!

The cave’s wonders have drawn attention over the course of time and have brought many people to the island, in hopes of uncovering the cave’s hidden treasures. It has also been a place of beauty, awe, and inspiration to those who have seen it in person.

Residents on the island knew about the existence of the cave for many centuries, however, the insides remained unexplored until 1673, when the French ambassador to Constantinople, Marquis de Nouadel, visited the island to explore the cave since he had information leading him to believe that there were valuable archaeological artifacts waiting to be discovered.

His plan was to discover the artifacts and take them back to France; instead, he and his team of escorts lowered themselves down on ropes only to discover the rarest artifact of all — the creation of the natural beauty of the cave itself!

Inspired by the cave, and since it was Christmas, Marquis de Nouadel decided to perform mass on the top of a stalagmite which resembled an alter. He then inscribed: “Here Christ himself celebrated Midnight Mass on Christmas 1673.” The inscription still remains today, along with many others.

These days, visitors do not need to lower themselves with ropes to explore the cave since a 411-step staircase has been installed and takes you more than 100 meters into the depths of the cave!