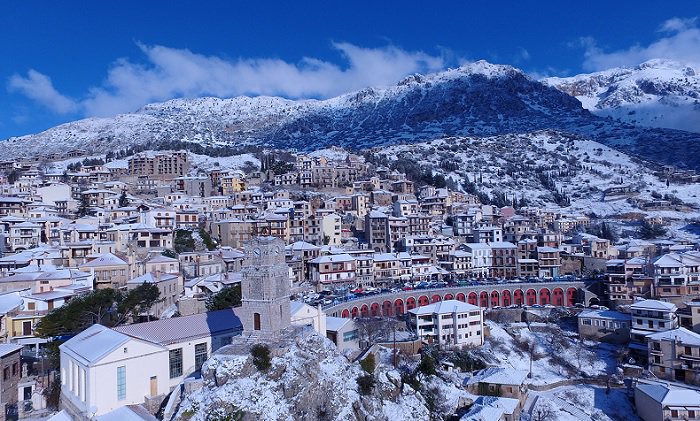 The cosmopolitan alpine town of Arachova is the perfect place to go to “see and be seen” during the winter season in Greece.

An easy two-hour drive from Athens, Arachova is often dubbed the “Winter Mykonos,” thanks to the wave of well-heeled Athenians who pass their weekends here from November onwards.

Draped along the slopes of Mount Parnassos, Arachova is an unexpected slice of Switzerland in the heart of Hellas.

Arachova is a must meeting point for Greek and foreign visitors during the winter season mainly due to its cosmopolitan way of life easily blending with tradition and local customs as well as the big and well-organized ski center on Parnassos.

The beautiful ski center of Parnassos features three main sections: Kelaria, Fterolakka, and Gerondovrachos. Kelaria has 15 tracks and 23 lifts and lies at an altitude of 2280 meters.

If you’re an experienced skier, Parnassos is like heaven with all the possibilities it offers. If you’re amateur, the ski center has coaching schools where you can start practicing sliding on snow and standing up on your feet.

Take a walk around the small town both in daylight and late in the afternoon. Try the Formaella cheese (which is sold only in Arachova) and locally produced tsipouro at one of the many traditional restaurants.

At night, Arachova offers many bars, clubs, and after-clubs that are usually full of young people dancing and enjoying themselves to the early morning hours.

Only 10 kilometers away lies the archaeological site of Delphi, a designated UNESCO World Heritage Site since 1987.

About 30 kilometers distant is the beautiful monastery of St. Luke, one of the most important Byzantine architecture sites across Greece. The nearby village of Distomo presents the Mausoleum of Nazi Victims from World War II.

For nature enthusiasts, Arachova is the stepping stone to explore the beauties of the Parnassos slopes. Countless tracks and paths leading to vast green meadows and crystal clear springs and waterfalls exceed 80 meters in height.

Alternatively, you can always try wandering, go hiking or biking, or even mountain climbing.

If you find yourself in Greece during the winter, Arachova should definitely be in your places to visit list!