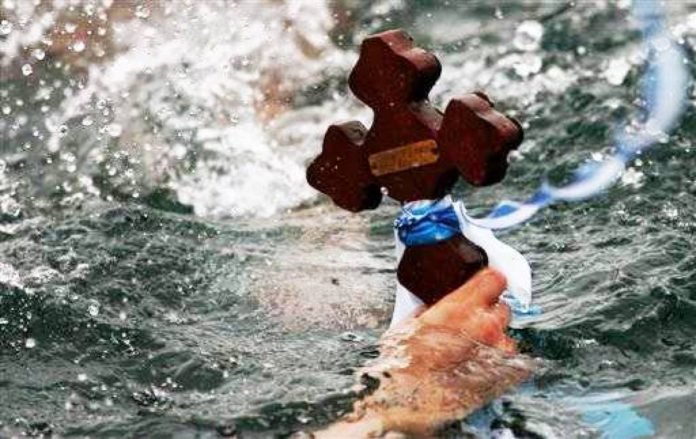 Epiphany is one of the most sacred Greek Orthodox celebrations, rich in Christian traditions that also date back to ancient times.

Epiphany, also Theofania or Fota, is celebrated on January 6 and is a day of joy and brightness, as Christians celebrate the baptism of Jesus Christ by John the Baptist.

Like Christmas and New Year’s Eve, the Epiphany holiday has its own carols (kalanda) as well. Children will sing the Fota kalanda in exchange for money and sweets. From the numerous versions of the Epiphany kalanda only those sung on Patmos island retain their original and fully oriented religious character. The particular kalanda begin with the creation of the world, the creation of waters by God, and finally end with the day of Jesus Christ’s Baptism in the Jordan river by John the Baptist.

In Thessalia, Central Greece, on Epiphany’s Eve the Rougkatsia (also Rougkatsaria) are the main attraction of the holiday, with groups of 10 to 15 people dressed in costumes, going from house to house singing the carols for a small amount of money in return. Every group must definitely feature a groom and bride (a young man dressed as a woman), priest, grandfather, doctor and the “arkoudiarides” (owners of bears that made the animals dance for the public’s entertainment in Greek rural areas until the 1970s.)

An ancient ritual that was modified by Greek Christians is the Ragkoutsaria. People in Kastoria and Kozani, in northeastern Greece, put on symbolic and scary masks in order to exorcise the evil spirits from the city. The masked men beg from passersby for their rewards for casting the evil spirits away.

The same custom is also found in Drama and surrounding areas. There it is called the Rokatzaria and people, again, wear scary masks and make deafening noises with the bells they are carrying, while walking around. In other villages near Drama and Kavala, the traditions of “arapides” (black men) is revived. Men wear sheepskin and carry dozens of bells. It is said that the arapides were warriors that took part in Alexander the Great’s wars and helped him scare away the Indian elephants in battle with the thundering sounds they made.

In Halkidiki, northern Greece, the Fotarades custom has been observed for centuries. There is the “king”, a man dressed in the ‘talagani’, the sheperd’s cape, who is carrying bells and leads the dance, while the ‘fotarades’ are bearing their swords made of wood to deter anyone from attempting to steal a sausage placed in the middle of the circle. On Epiphany Eve, young men sing the ‘kalanda’ and get meat, sausages and money in return. On January 7, the feast of John the Baptist, they dance traditional dances at the village square.

Finally, according to popular belief, the bright lights (Fota) of the Epiphany chase the mischievous Kalikantzaroi (goblins) back to the hollow earth for another year.