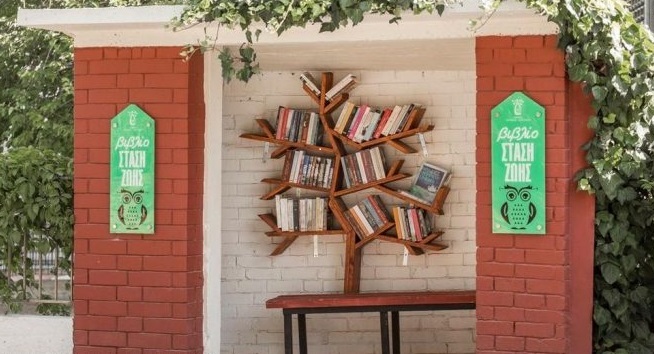 Bookcases were built inside the stone bus shelters along the number 64 bus route which connects Filyro with the centre of Greece’s second city.

The idea originated with the Pylaia-Hortiati municipality and was implemented with the Filyro Citizens’ Communication Movement.

Initially, four ‘library’ bus stops were created in Filyro and one in Panorama.

“The most important thing is that the citizens have embraced the initiative and keep it alive. They have adopted the spaces and try to keep them filled with books. We started off with one stop and managed to increase this to five,” Pylaia-Hortiati Mayor Ignatios Kaitezidis told the Athens-Macedonian News Agency (AMNA).

The idea was launched about two years ago, with the first bus stop starting with about 100 books.

Later versions also had benches to sit on, spaces for newspapers and magazines plus notice boards for municipality events and activities.

When they return the book they have borrowed, users are also encouraged to bring another from their own collection to “keep it company” and bring joy to other passengers.

According to organizers, not everyone is conscientious about returning books and some are actively destructive, but a balance is struck by the many people that actively support them and fill them with books again and again.

The municipality received a Best City Award for the idea in 2016, and it has since been adopted by many municipalities in Greece.