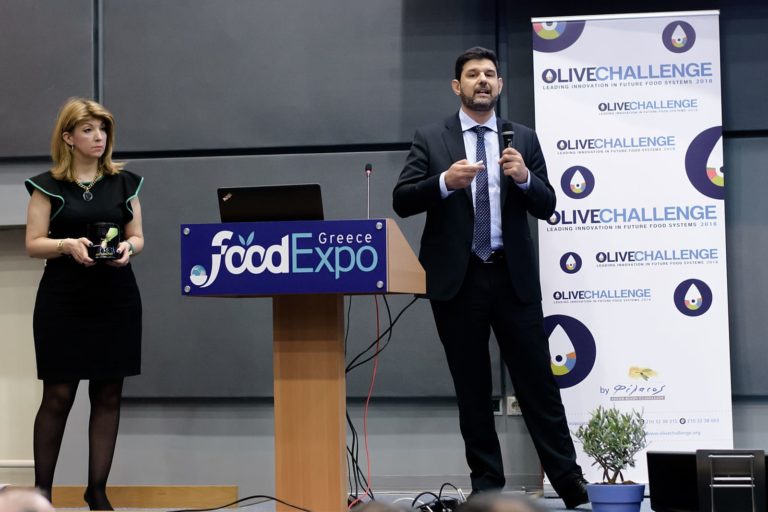 University of Athens Associate Professor Prokopios Magiatis and his team have invented some unusual devices.

Now, their latest innovation, the Olive Predictor, helps olive-oil producers determine the best time to harvest their olives to maximize the health benefits of their oil while producing enough quantity. This is useful because healthier olive oil can bring higher prices from health-conscious consumers.

The Olive Predictor received the highest score in the Olive Challenge, an unusual competition organized by the Filaios Olive Oil Society in collaboration with Greek governmental and private organizations and institutions.

This was a contest for Greeks who want to do something new with olives or olive oil. A variety of striking innovations, inventions and plans for various aspects of the Greek olive oil and olive sector were welcomed and submitted.

The Olive Predictor is an array of patented devices that was developed at the School of Pharmacy of the University of Athens by Prokopios Magiatis, Eleni Melliou, and their research team (Panagiotis Diamantakos, Iliana Kalaboki, Triada Giannara, Emilia Rigakou, Annia Tsolakou, Katerina Papakonstantinou, and Dr. Christos Papanikolaou), in collaboration with George Stavropoulos of Democritos Scientific Research Center.

The devices enable producers to predict the quantity and quality of oil their olives will produce in a very short time, using just a small amount of fruit.

As Magiatis explained, this invention enables olive farmers to make “the optimal choice about the harvest time to achieve the optimum ratio of quantity and quality”.

In this case, the quality question focuses on the amount of oleocanthal and oleacein, which are beneficial ingredients covered by the European health claim about the positive effects of olive oil’s phenolic compounds on human health, according to EU regulation 432/2012.

More specifically, Magiatis says, “the device consists of two main parts. The first part is a miniature mill that includes a mini-grinding mill, a mini-malaxer, and a centrifuge system capable of producing a sufficient quantity of oil even from 200 grams of fruit. The second part and the great innovation of the system is the Aristometro device,” which is small enough to hold in one hand. With as little as seven grams of oil, in just 15 minutes, this device can predict the oleocanthal and oleacein content of the oil to be produced, and therefore can determine whether the oil is likely to be eligible for the European health claim.

Judged the best invention in Greece in 2016 by the Association of Greek industries (ΣΕΒ) and Eurobank, the Aristoleo test kit also allows producers to measure oleocanthal and oleacein levels at the olive mill.

However, as Magiatis added, “it is based on a visual comparison of the obtained color with a printed scale. The visual method was based on experience.”

Developed after another year of research, the Aristometro device enables inexperienced users to obtain an accurate reading very quickly.

While the Aristometro is now being used at no charge in ten Greek olive mills, thanks to partial funding from the EU Interreg Med Aristoil Program (in collaboration with Nikos Krimnianiotis), the Olive Predictor as a whole is so far confined to the laboratory.

Magiatis hopes to find investors interested in funding the construction of a commercial prototype and then coming to an agreement with a company that will make it available to the public. He believes the Olive Challenge will help his team contact potential investors and learn how to move from the research laboratory to real industry.

He adds, “Greek universities are full of new ideas, but there is a big gap between the university and industry. The Olive Challenge was a very smart idea to help fill this gap.”

Others agreed. Forty proposals were submitted and evaluated, and the top 15 teams presented their projects to a live audience at a Demo Day at the Food Expo at the Metropolitan Expo Center near the Athens airport on March 11.

That day, the advisory committee voted online along with the audience, whose votes accounted for 30 percent of the score, considering the concept, innovation, team and business-development plans.

Proposals ranged from a digital system to help control pests during cultivation to unusual new products such as olive oil drops and a cloud platform to safeguard quality during storage and delivery.

With so many good ideas, it proved too difficult to select the expected seven winners, so the ten best were honored. Their prize is five months of mentoring, advising, and networking, with marketing and technical help tailored to the needs of the winners.

Comments from several advisory committee members echoed the hopeful response of the internationally known Mediterranean diet expert Antonia Trichopoulou, who was impressed by the innovative thinking of the young people who entered the competition. Committee members praised the wide range of entries, which point to a country moving beyond economic crisis to what one called “another Greece of progress and creativity.”
________________