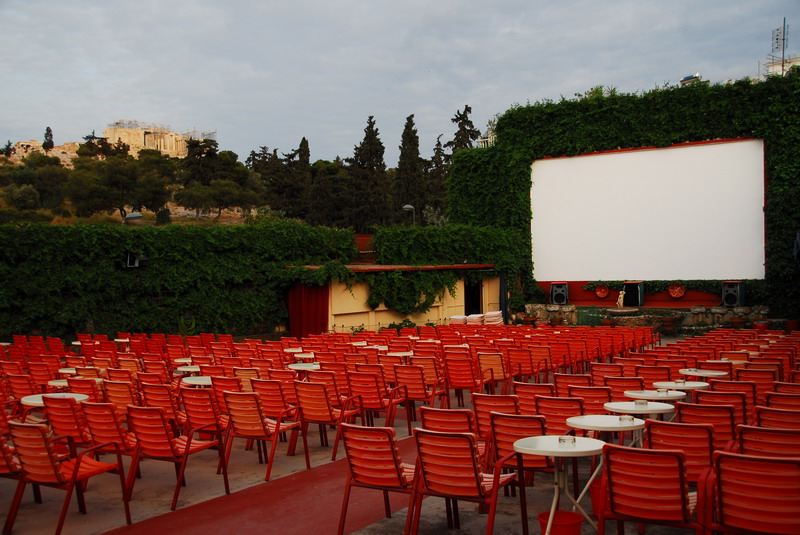 Cine ThisioGoing to a summer movie is one of the unique Greek pastimes; watching a film under the stars with a cool breeze and (often) the smell of flowers is one of the many things that make Greece special.

Open-air cinemas are a thing that very few countries can offer. While for Greeks catching a movie in a summer cinema sipping a cold beverage is like an institution, for visitors it is a one-off experience, almost as enjoyable as a dive in the cool, crystal-clear waters of Mykonos or a visit to the Temple of Zeus at Sounio.

Most Greeks can’t wait until their favorite summer cinema opens in May, eager to catch a movie in the open air, even if they are not crazy about the film itself. Most of the time it is a ritual, where even a date at the movie theater becomes more romantic.

Athens has a number of emblematic and popular open-air movie theaters, with Cine Thisio in Thission being at the best for years.

Built in 1935, it boasts a view of the Acropolis and the Parthenon.

Close to Cine Thisio, less than a kilometer away, there is Cine Paris. It is in the Plaka neighborhood, also underneath the Acropolis and has been described as one of the best open-air cinemas in Europe.

Athens has many open-air theaters, even though their number was more than double 20 years ago, and there were even more 40 years ago.

Every neighborhood has its own with some standing out, attracting movie lovers from other districts. Cine Flisvos in Paleo Faliro is one of these, only a few meters away from the Flisvos Marina. Aigli, in Zappeion, is another located right next to the National Garden.

Mykonos is a party island, but when one wants to relax they can lay in a hammock at Cine Manto, or sit at a table and have dinner while watching the film.

In Santorini, Cine Kamari, built in 1987, is also one of the best open-air theaters. Just outside the coastal area of Kamari, the theater is an oasis of green, with the bar serving cocktails and local wines.