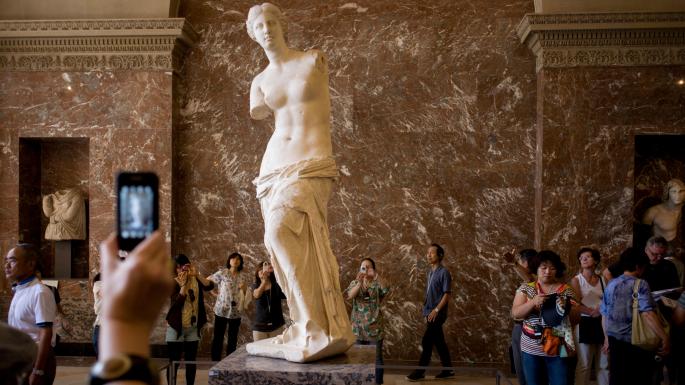 It was the morning of April 8, 1820, when a Milos island farmer named Giorgos (or Theodoros) Kentrotas was digging in ancient ruins in his field to get some stones he needed.

Yet, instead of stones, Kentrotas found a statue that turned out to be one of the most famous statues in the world — the Venus de Milo, or Aphrodite of Milos.

Nearby in the same area, French naval officers were conducting excavations for ancient artifacts. When the pickax of the Greek farmer hit something unusual and dug out a piece of a marble statue, two French Navy sailors who were participating in the excavations took notice.

Kentrotas sensed that his discovery was valuable and tried to cover the marble statue piece with dirt again, fearing that the French would grab it or would require to buy it cheap.

However, the French were not fooled by the farmer and gathered around his digging spot and urged him to dig further. Kentrotas complied and kept digging until the entire sculpture was revealed.

The fragments of the sculpture were moved to Kentrotas’ sheepfold, while the French had already begun to communicate with consuls and ambassadors of their homelands of Constantinople and Smyrna.

Olivier Voutier was the French naval officer who was heading the excavations for antiquities on  Milos. He had studied archaeology, so when he saw the findings, he informed his compatriots that he did not have enough money to buy the statue.

Along with the Venus de Milo, the French discovered two dedication plaques and a base plinth with an inscription of the name of the sculptor.

The missing arms of the statue were not found, however, and Voutier’s sketch shows Venus without arms.

After the discovery, the French started negotiating the buying price for the statue. The initial price offered was 400 piasters, known in Greece at the time as grosi (γρόσι); the currency used by the Ottoman Empire until 1844.

However, negotiations became complicated as other parties got involved in the negotiations, making Kentrotas’ opinion secondary. The Ottomans and French Admiral Jules Dumont d’Urville entered the negotiations, which resulted in the delay of the transfer of the statue to France.

Finally, the French won and the pieces of Aphrodite of Milos were safely put on the ship to be transferred to France. Its copy has been displayed at the Louvre Museum ever since.