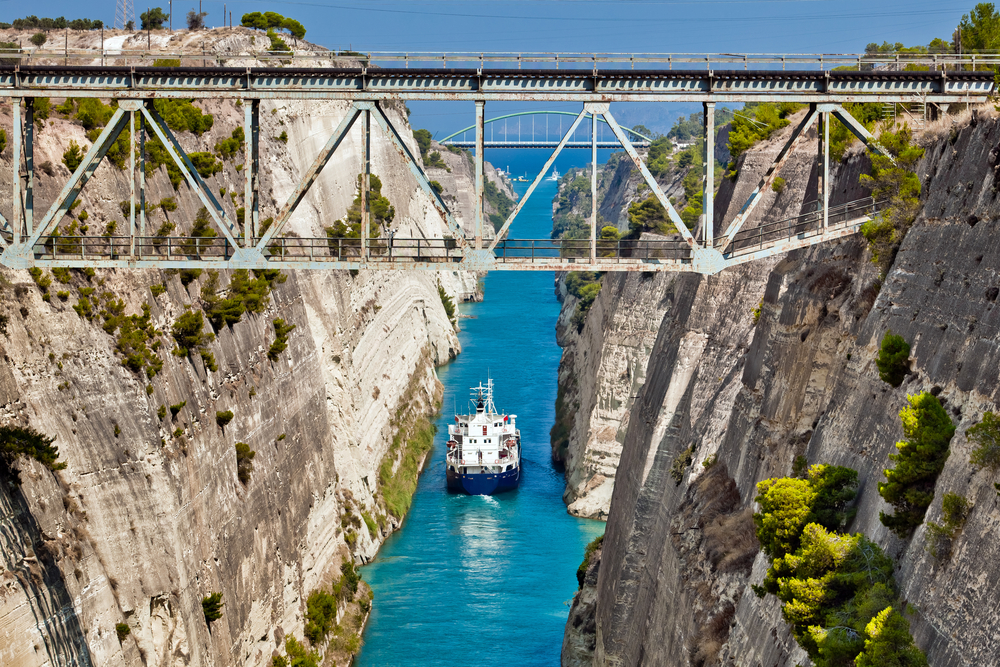 Peloponnese is an amazing peninsula with a rich history and an abundance of natural beauty. But there are unique historical places on it that deserve special attention.

A small settlement in the past was an important trading point in the Byzantine Empire. Unique in that it is located on an island that was formed from a piece of rock split off from the mainland.

The decision to build a water line was taken by Emperor Nero. With her help, he wanted to save time on the way from Athens to Italy. But the idea was embodied only in the XIX century – a canal 8 meters deep and 23 wide connected the Ionian and Aegean seas. And the route of the ships became shorter by 400 kilometers. Only boats go on the canal independently, large ships – in tows. Liners are not allowed.

In 1821, Kalavryta became the center of a national uprising, which developed into a fierce war against the Turks. During the Second World War, all men were shot by German troops in the city and a huge fire was set up. A clock is installed on the city tower, which always shows one time – 14 hours and 34 minutes – the beginning of a mass shooting.

The history of the city began in the Mycenaean period. The architecture of Napflion is similar to Venice: the construction was carried out with the involvement of Italian masters, and for a long time the city was under the protectorate of the Venetian Republic. Since Napflion served as one of the most important outposts, the Italians invested huge sums in it.

Mycenae is the oldest polis with a unique history. It is believed that this city was the capital of ancient Hellas, and its king with the army participated in the siege of Troy.

In the XIV century, there was a well-developed city with a population of 40 thousand people. Finds of archaeologists indicate that the city paid much attention to the development of art. Of particular architectural value are the ruins of the Cathedral of the Metropolis and the monastery of Perivleptos.

The total area of ​​3 unique caves is hundreds of thousands of square meters. Currently, two of them are flooded. But still, visitors can see huge stalactites and a magnificent underground lake.

This is the place where the first Olympic Games took place. The organizer of their considered to be Hercules. Competitions were held here until 394 B.C.

All buildings in the city resemble small fortresses since the local population constantly had to fend off conquerors. Perhaps, therefore, it is believed that descendants of militant Spartans live in Mani.

A unique architectural structure, striking in its scale and acoustics, was built in memory of the talented healer Asclepius, the god of medicine and healing. He was a favorite student of Chiron and died of lightning from Zeus for the gift of the resurrection of people. So says the legend.