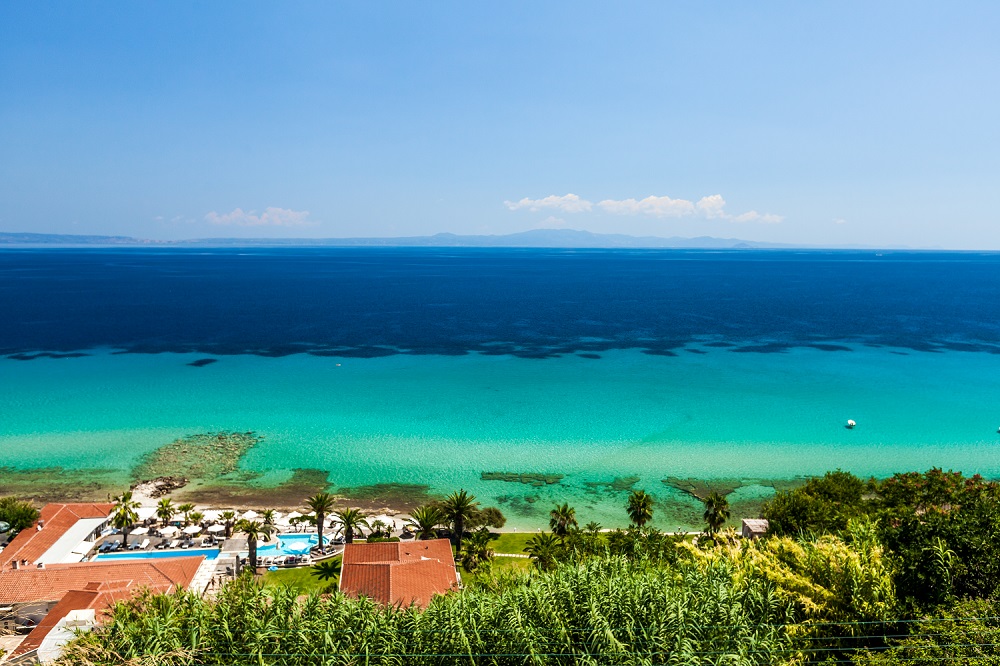 Halkidiki is a popular resort region in the north of Greece with a high investment attractiveness. Competitively competing with other regions in Greece Halkidiki helps picturesque nature, sandy beaches, modern resort hotels and nightclubs, schooling and surfing, golf courses and casinos.

The investment climate in Halkidiki and in general in Greece is formed by:

Millions of tourists from all over the world come to Greece. Even the economic crisis, from which the country is successfully emerging, has not changed this situation. The Greek Ministry of Tourism informs that in 2019 alone, more than 27.5 million tourists visited the country. And experts confidently predict a further increase in tourist flow. What forces the authorities to make significant investments in expanding the number of rooms. Private investors invest in the construction of hotel complexes, and property owners add new offers on Airbnb.

Greece successfully copes with economic tasks, which allows reducing the tax burden. For example, in 2019, the single ENFIA real estate tax began to decline, and it is also expected to abolish VAT on new buildings, which has a positive effect on the construction sector. Besides, Greece has a European ESPA program, which allows you to receive a subsidy of up to 60% for the construction and reconstruction of resort infrastructure.

Competitive value of the real estate (compared to other EU countries)

Due to the economic crisis, the value of Greek real estate has fallen significantly. At one time, it was even the cheapest in Europe. But now the country is successfully restoring the economy and is paying off international creditors. Against the backdrop of such a rise, the value of real estate began to grow, especially in Athens and Thessaloniki. But, in any case, at the moment, pricing in Greece remains more loyal than in other European countries.

Thanks to an investment program for the purchase of the real estate of €250,000, you can get a residence permit not only for yourself but also for your family. In other countries that offer "golden visas", the amount is much higher. In Greece, by far the lowest threshold for the Golden Visa program in Europe!

Investments in the transport network of the Halkidiki Peninsula

In northern Greece, the construction of a new road with a length of about 17.5 km was completed. The road starts at the town of Nea Potidea and ends at the key point for the entire peninsula, in the city of Kassandria. You can ride on the road for free. Engineering networks were modernized along the highway. The project created about 340 new jobs. The European Regional Development Fund has invested €80,000,000 in the construction of this section of the road network. It facilitated the transport network: traffic became faster and safer, the number of traffic jams during the high tourist season decreased.

Also, work was carried out on the other side of the island – on the Potidea-Sani section. The project became part of the Kassandra road network. At the beginning of the highway is the new bridge of Potidea, and the end is the Sani crossroads. The goal of the project was to expand the existing highway. The work was carried out following European standards. Road signs, safety banners, and lighting are also installed. Besides, the Sani intersection was modernized and the reconstruction of the old pavement was carried out.

The second stage of construction will be a section from Kassandria to the village of Paliouri. The road will pass in the middle of the peninsula and has exits to the villages.

They also plan to build a highway in Sithonia in the middle of the peninsula with exits to the villages, so that tourists can quickly get to their hotels, which are located in the settlements at the far end of the peninsula. Now only the ring road functions, but it is long and inconvenient to get to remote towns and villages.

This hotel is one of the largest investments in the tourism sector of Halkidiki. Med Sea Health and Greek-Russian businessman Andrei Ragotis have invested €120 million in the development of the hotel. The work started in 2014 and was completed after 2 years. The result was an impressive resort – only the harbor holds 81 ships up to 40 meters each. The total area of ​​the resort is 330 hectares. The number of rooms allows accommodating 900 people. Of the 300 rooms, 48 ​​have access to private pools. On the territory, there is a unique hydrotherapy center, which is awarded prestigious international awards. 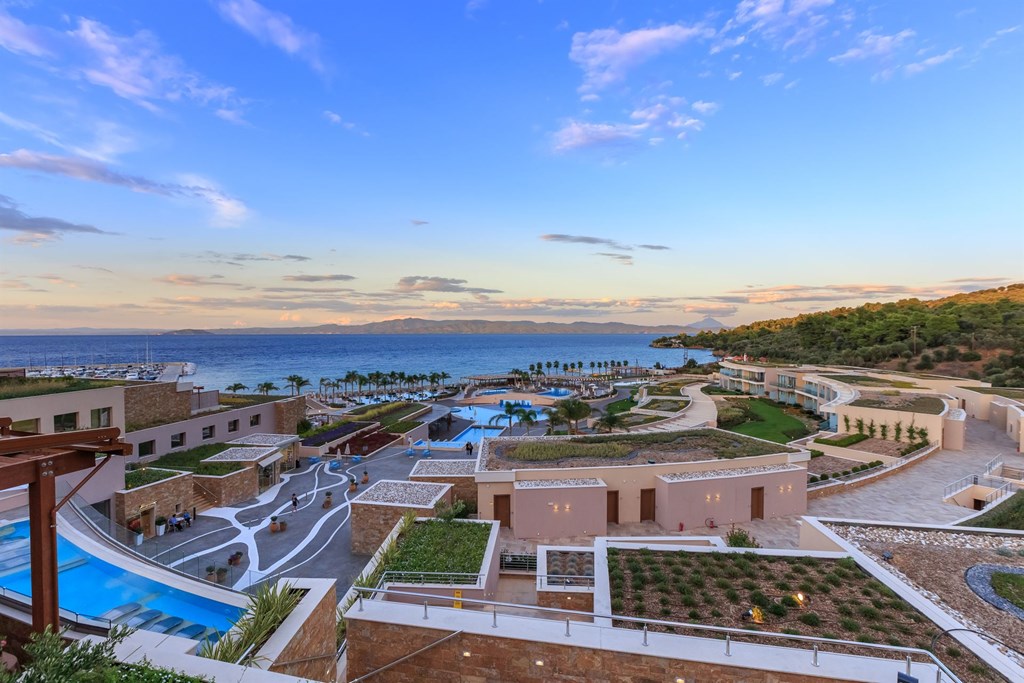 One of the largest large hotels in the Russian Federation is the Cronwell Hotels & Resorts hotel chain, which acquired the Halkidiki – Cronwell Park Hotels in Nea Skionina, Cassandrei, Cronwell Resort Sermilia in Psakoudia, and completed a complete renovation.

The largest investment in the Halkidiki region was made by Ivan Savvidis – he acquired the tourist district of Xenia Paliouri for about €80 million. The complex will consist of several hotels, infrastructure, and its marina.

Mendekidis Construction is investing €50 million in the Agios Ioannis region of Sithonia. This amount will be spent on the construction of a hotel complex with an area of ​​253 acres for 500 beds and a tourist village. 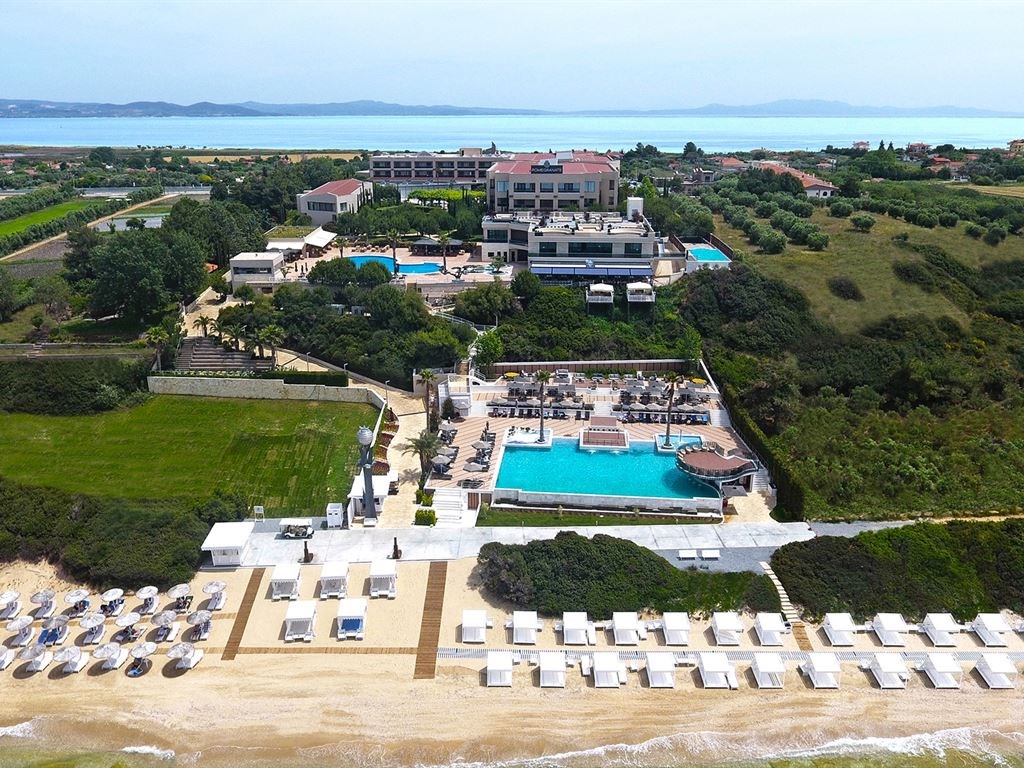 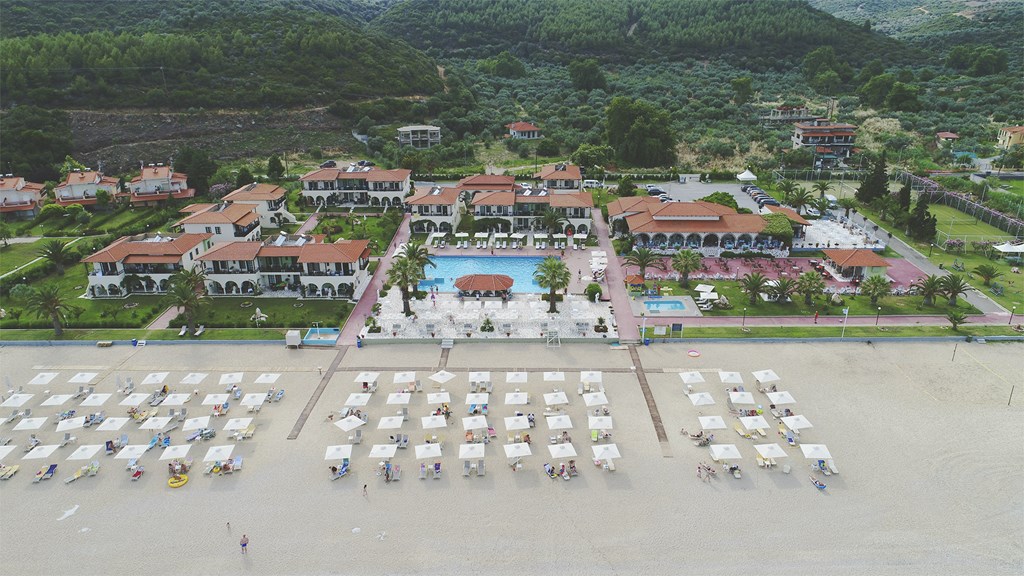 The Sani Group has made significant investments in the region – about €24 million in infrastructure plus the purchase of the site itself. At the end of June 2017, the Sani Dunes hotel complex was opened on the Halkidiki peninsula. It consists of 136 rooms and suites. The infrastructure of the facility is impressive: its beach, spa, gastronomic establishments, swimming pools. The total area of ​​the complex is 41,000 sq.m. 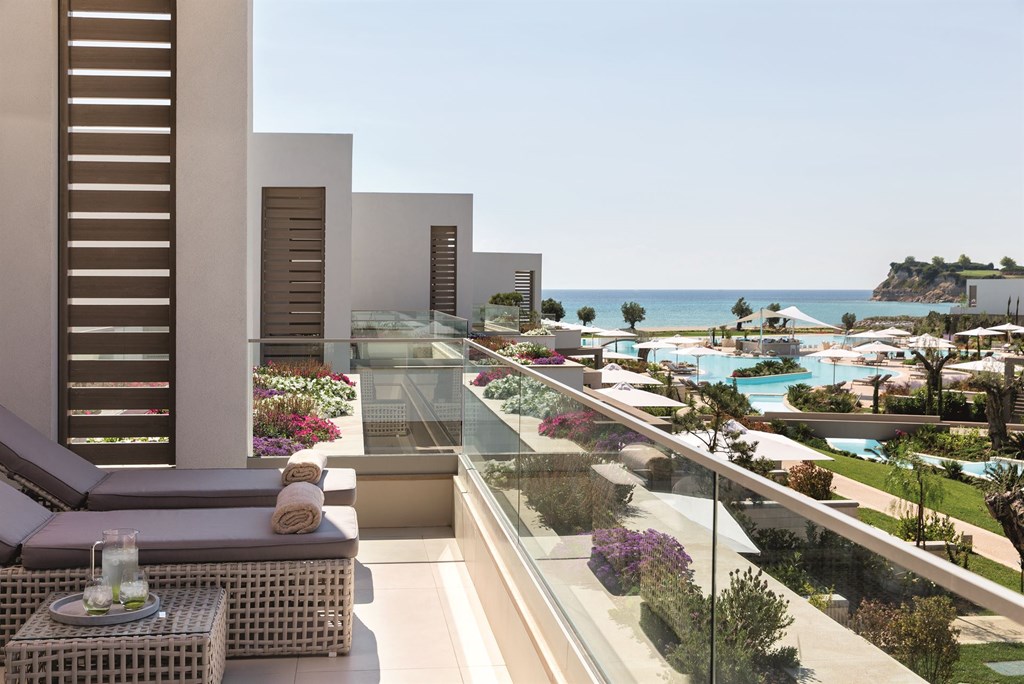 Investments in this hotel amounted to €52 million. It opened on a peninsula in the picturesque village of Gerakini on the isthmus of Cape Kassandra and Sithonia. The area of ​​the complex is 9 hectares. The hotel complex boasts a 450-meter beach, panoramic views, pine groves and an impressive number of rooms, including separate cozy bungalows. 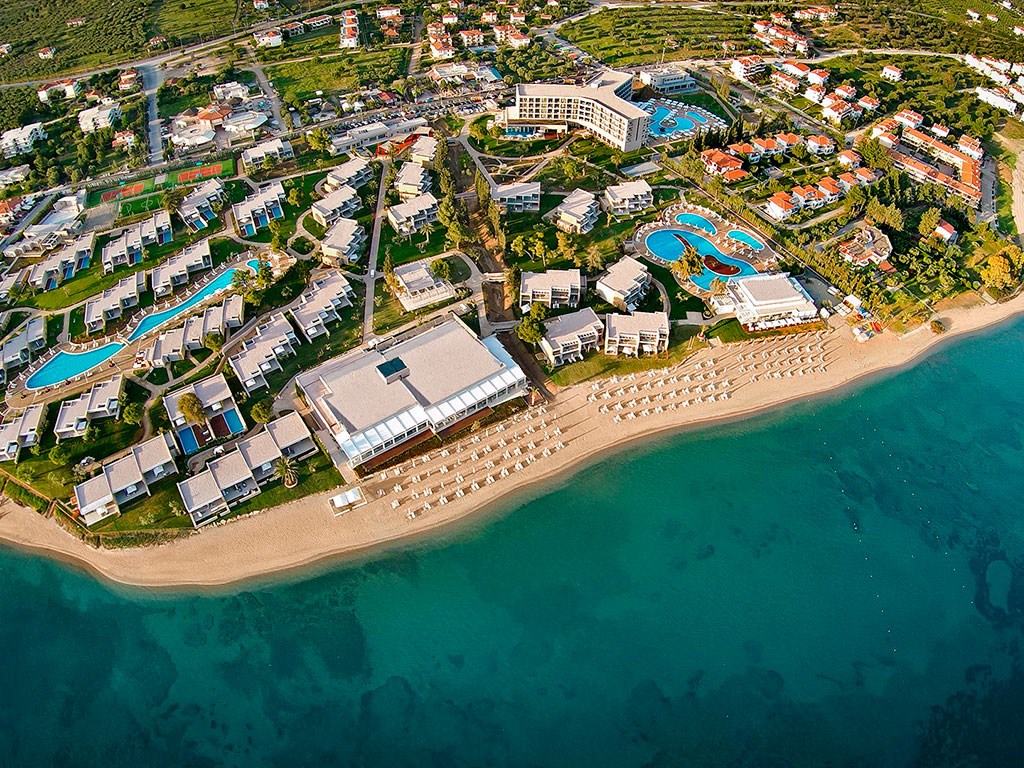 The Blue Lagoon chain makes significant investments in hotels on the peninsula. For example, in 2017, an additional €3 million was invested in the BlueLaguna Princess Hotel, which opened in 2015, which significantly expanded the number of rooms. A year later, the network opened nearby the new Tui Sensimar BlueLaguna Palace hotel, in which it invested €12 million.

Enigma Shopping Center has become a major investment project on the peninsula. The contribution to the construction was made by the holding of the Mouzenidis Group. Four dozen shops and boutiques are open on the territory of the shopping center. Enigma Mall is the largest center for the sale of natural fur products on the peninsula, and only in the shopping center exhibits the works of famous Greek sculptors.

Investments in construction and real estate

Currently, there is an active implementation of the Kriaritsi project – a residential complex on the Sithonia peninsula. It has beautiful sandy beaches, calm sea, and clean mountain air. Kriaritsi is the largest construction project in Northern Greece, which was designed and implemented by Grekodom Development. The project is located in Sithonia – the middle small part of the Halkidiki peninsula and has a direct view of the Holy Mount Athos.

Currently in the housing complex is the development of cottages and villas with an area of ​​60-250 sq.m. In total, according to the plan, 3 thousand houses will be built according to standard and individual projects. The cost of housing starts from €180 thousand.

Buying property on the Halkidiki peninsula is not only an opportunity to earn money by renting a home on your own or through a management company but also an opportunity to obtain a residence permit in Greece. To obtain a permit, you need to buy one or more real estate of €250,000.

Applicants for residence permits in the Halkidiki region, and these are mostly residents of Russia and Ukraine, are in demand for apartments, cottages, and villas in popular tourist villages such as Nikiti, Chanieti, Pevkohori, and Nea Skioni. Under this program, a residence permit in Greece can be obtained not only by property owners but also by family members – children and parents.

Other investments in Halkidiki

Spanish tennis superstar Rafael Nadal opens the Tennis Academy in Halkidiki in April 2020. The new project will be located in the resort of Sani. The stunning Rafa Nadal Tennis Center complex with an area of ​​over 400 hectares will consist of 8 courts. Tennis training in a luxury complex will be available to players of all ages and skill levels. Lessons will be taught by highly qualified trainers.

Huge investments are made by the mining giant Eldorado Gold in deposits in the western peninsula of Kassandra. In parallel with mining, the company is engaged in restoring the environment in the region. She has already created a nursery with an area of ​​150,000 square meters, where 300 different species of local plants grow.