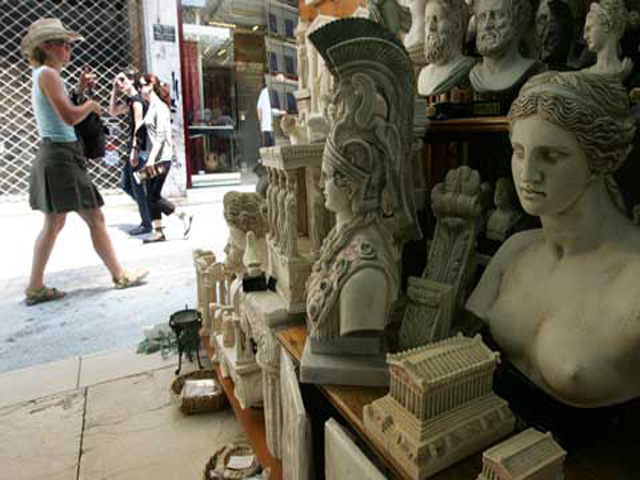 Chris, a professor of criminology from New York, was visiting Athens for a conference. Under normal circumstances, he would have spent his free time with his colleagues in Plaka and Monastiraki, eating out and buying souvenirs for his children. But not this time. He had read about tours of the Greek capital offered by Alternative Athens, which sounded particularly tempting. “I was right,” Chris told Kathimerini after a three-hour walk around the “real” side of Athens in the company of his guide Melina. “Those who claim that Athens is not even worth one afternoon before departing for the islands are deeply mistaken. Your city is magical!”

For years now, the Greek National Tourism Organization and others have been trying to help Athens shake off its bad reputation. They are finally managing to convince travelers that the city as a whole is not the dirty, hostile and inhospitable place that years of bad press had presented it to be, but rather has a wealth of interesting, charming and fascinating aspects that make it a destination well worth visiting.

Alternative Athens, a simple initiative, is doing its own bit to boost public opinion regarding the Greek capital. “We must show visitors Athens as it really is,” Tina Sklavolia-Kyriaki told Kathimerini. The founder of Alternative Athens organizes a range of themed tours: from the popular Food Walk, stopping at restaurants and other eateries where the locals go, and the City Walk, an off-the-beaten-track tour that helps participants to discover links between the past and present, to the Night Bar Hopping Tour and the Hip Athens Street Art Tour, which takes in some of the more impressive graffiti works to be spotted around town.

The idea originated from her own experience of exploring cities. “We wanted to help visitors understand the country beyond the stereotypes, eating with the locals, and discovering local shops and places that usually get left out of city tour schedules. I had been exploring Athens by myself for years, out of personal interest. When I looked at the tour programs a couple of years ago, I realized that they only included the usual Athenian sights, the Acropolis Museum, the Acropolis, Syntagma, Plaka, and always sticking around ancient Athens. But the city is much more than that. It’s very complex, like a theme park. In just one hour you can see so many different things; the scenery can change dramatically. We don’t notice because we have grown up here. We don’t see the city with fresh eyes. Moreover Athens is not one of those places that you fall in love with at first sight, like Paris or Rome. It’s a place you can only start loving after you have discovered it. But once you understand Athens, it really is fascinating.”

The response has been great. Canadians, Americans, Australians, people from all around the world have booked a place on one of the Alternative Athens tours before visiting. Most of them find out about the tours online (www.alternative-athens.com). “I saw places that I would never have found by myself,” noted one visitor. “Now I love Athens even more.” Most tourists arrive with low expectations. “We arrived in Athens a few days ago and the exceptional sightseeing tour made us appreciate the city very much.”

“One of the best comments we have received was from a Croatian who regularly visited Athens for work,” Sklavolia-Kyriaki notes. “This Christmas he came on holiday with a couple of friends and they did the Alternative Athens City Walk. At the end of the tour he said: ‘I had warned my friends not to expect much because Athens is an ugly city. But now I have changed my mind.’”