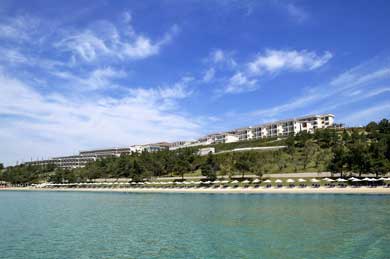 A Greek hotel has been voted Europe’s best all-inclusive unit, as a poll of TripAdvisor’s online users showed that the Ikos Oceania Club in Halkidiki is considered the continent’s best and is the only European entry in the world’s top 25 all-inclusive hotels, at number 21.

Greece has a strong presence in the European top 25, as the all-inclusive system is growing fast in the country. Four other such hotels have made the rankings, with Club Med Gregolimano on Evia at number 14, Holiday Village Rhodes at 16, Nana Beach on Crete at 18 and Atlantica Porto Bello Royal on Kos ranked 20th.

Meanwhile the Myconos-based Bill & Coo Suites picked up the Best Beach or Coastal Boutique Hotel in Europe Award at the World Boutique Hotel Awards 2014 in London.