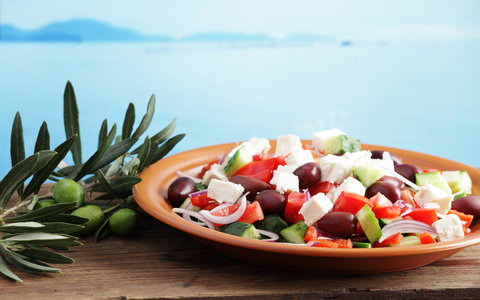 Greek cuisine has a long tradition and its flavors change with the season and its geography. Greek cookery, historically a forerunner of Western cuisine, spread its culinary influence - via ancient Rome - throughout Europe and beyond. Greece has a culinary tradition of some 4,000 years. The most characteristic and ancient element of Greek cuisine is olive oil, which is used in most dishes. It is a Mediterranean cuisine. Contemporary Greek cookery makes wide use of olive oil, vegetables and herbs, grains and bread, wine, fish, and various meats, including lamb, poultry, rabbit and pork. Also important are olives, cheese, eggplant(aubergine), zucchini (courgette), and yogurt. Greek desserts are characterized by the dominant use of nuts and honey. Some dishes use filo pastry.

Greek cuisine uses some flavorings more often than other Mediterranean cuisines do, namely: oregano, mint, garlic, onion, dill and bay laurel leaves. Other common herbs and spices include basil, thyme and fennel seed. Many Greek recipes, especially in the northern parts of the country, use "sweet" spices in combination with meat, for example cinnamon and cloves in stews. A great variety of cheese types are used in Greek cuisine, including Feta, Kasseri, kefalotyri, Graviera, Anthotyros, Manouri, Metsovone and Mizithra.

Dining out is common in Greece, and has been for quite some time. The Taverna and Estiatorio are widespread, serving home cooking at affordable prices to both locals and tourists. Mezés is a collective name for a variety of small dishes, typically served with wines or anise-flavored liqueurs as ouzo or homemade tsipouro. Orektika is the formal name for appetizers and is often used as a reference to eating a first course of a cuisine other than Greek cuisine. Dips are served with bread loaf or pita bread.

The traditional coffeehouses in Greece are called kafenia, and they offer coffee, refreshments, alcoholic beverages and snacks or meze. Preferred types of coffee are, among others, Greek  coffee, frappé (a Greek foam-covered iced coffee drink), and iced cappuccino and espresso.

The Greek diet is one of the healthiest and most natural ways of eating. Because of the minimal use of meats, dairy, and processed foods and the high reliance on fresh seasonal vegetables, olive oil, and beans, the Greek population has shown some of the lowest rates of heart disease in the world. Following a diet similar to the Greeks can improve your health and overall well-being as well as give you a delicious array of Mediterranean-inspired meals to enjoy.