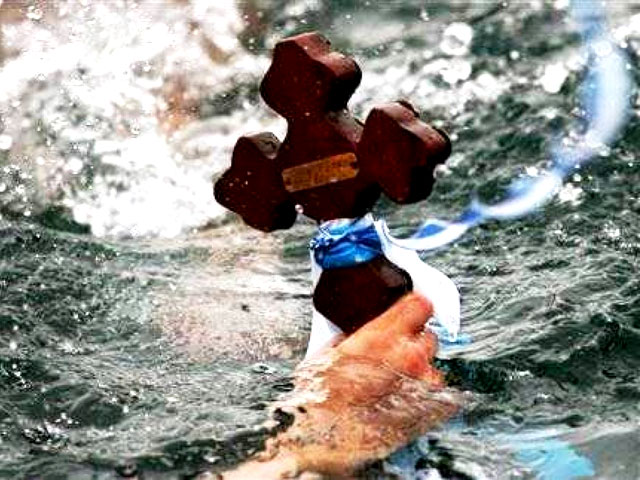 On the stroke of January 6th, the "twelve days" of Christmas officially come to an end. This day, takes on a special meaning in Greece. Here, there is a special ceremony of blessing the waters and of the vessels that ply them.

The modern observance takes the form of a priest hurling a large crucifix into the waters. Young men brave the cold and compete to retrieve it. These days, the cross is generally attached to a nice, safe long chain, just in case that year's crop of divers is something less than desired.

After the diving, local fishermen bring their boats to be blessed by the priest.

What does all this have to do with Christmas? Orthodox belief says that it was the day of the baptism of Jesus, and that this is where the day's association with water arises.

But the observance itself may pre-date Christianity. There was, in Roman times, what was said to be a ceremony that opened the season of navigation. However, as any Greek fisherman can tell you, whatever the date of the opening of the season of navigation really is, it definitely is not January 6th, when weather can be stormy and the waters are at their coldest.

The day is also said to be the date of a festival of emperor-worship, also dating from Roman times. Possibly that, with attendant offerings for the emperor, is the root of this ceremony. Or it may also reflect a survival of the custom of giving precious offerings to sea, river, and spring spirits to assure their benevolence or halt their interference. On Epiphany, the kallinkantzari, the malicious spirits who are said to be active during the twelve days of Christmas, are believed to be banished for the rest of the year.

Epiphany is also called the Phota or Fota, in reference to the day being a Feast of Light, and it is also the saint's day for Agia Theofana.