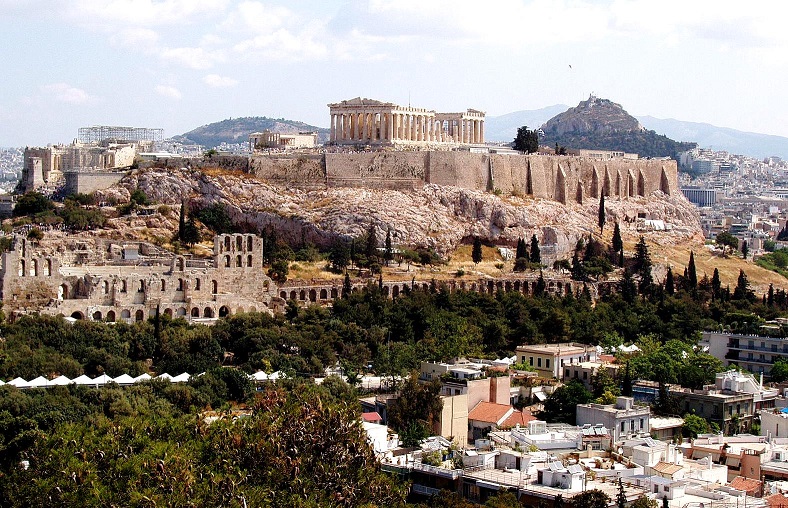 We are talking about the following cities:

The first inhabitants settled in 5000 BC. According to Greek mythology, the city was named after the mythological hero of Argos, the son of Zeus and Niobe, while Homer frequently mentions the city and its characters in his poems. Hera, the patroness of marriage and family, especially revered Argives, as evidenced by the temple dedicated to her and festivals "gerei." Today in Argos, you can see the Mycenaean tombs, the temple of Aphrodite and the theater with a capacity of 20,000 people.

The first inhabitants settled in the Acropolis in 5000 BC. According to Greek mythology, the city was named in honor of the goddess Athena which planted an olive tree. Goddess of wisdom, war and art is the patron of Athens. During the classical period  Athens was considered as  one of the most advanced city-states. The birthplace of democracy, the city gave the world such greats as Socrates, Plato, Aristotle, Aeschylus, Sophocles, Euripides and other ancient philosophers, thinkers, scientists.

The first inhabitants settled in 4000 BC. The ancient city of Cydonia was situated on the hill above the harbor of Chania Kastelli. Ruins date back to the Minoan period (2100-1100 BCE), but traces of habitation in the area date back to the Neolithic period. According to Homer, the city was one of the most important cities of the era. It is believed that the Saracens destroyed the city of Cydonia in 828, and later the Venetians rebuilt a modern city of Chania.

The first inhabitants settled in the area in 3500 BC. As the results of the excavations, the area where today is the city of Patras, was inhabited since the early Helladic period, from mid-third millennium BC. Like many other places in Greece, it was later captured by the Turks, and then burned by Albanian Muslims. Today the city is divided into two parts: the Lower City (Kato Poly) and the Upper Town (Ano Poli) and has a population of about 200 000 inhabitants.

The first inhabitants settled in the area in 3000 BC. Ancient city founded in the 3rd millennium BC and named after the nymph Triki, the daughter of Pinia, is located under a modern urban center. The location near the river, in the central mainland Greece, led to the prosperity of the city, despite the fact that it was in the hands of the Persians Achaemenid in 480 BC, and then passed to the Romans. Sanctuary Asklepion is one of the oldest archaeological finds in the area.

The first inhabitants settled in 3000 BC. Foundations of buildings, carved into the rocks, drains and walls of adobe bricks indicate that Thebes was inhabited for 5000 years, although the location of the modern city on the ruins of an ancient settlement complicates the work of historians. The city plays an important role in Greek mythology, regardless of birthplace of Hercules and the place where the winged monster Sphinx proposed a riddle to every passerby , until  Oedipus solved it once. Today, Thebes - is a vibrant city, and while some tourists visit for its archaeological sites, a number of the surrounding areas, such as Athens, delaying the influx of tourists, and the number of visitors Thebes remains at a low level.

The first inhabitants settled in the area in 1300 BC. Homer in the Iliad mentions Chalcis, which indicates that the city should be at least 2,800 years old. Indeed, academic books claim that Halkida was founded before the Trojan War, between the XII-th and XIII-th centuries BC as Ionic colony of Athens. Chalkida is the capital of the second largest Greek island of Euboea, which is separated from the mainland of Greece by the water channel.

The first inhabitants settled in 1100 BC. This ancient city is now the capital of the island of Lesbos, located near the Turkish coast. Aristotle lived during  two years, 337-335 gg BC on the island. Today, visitors can admire the city Gateluzon Castle, Church of St. Teraponda and the Statue of Liberty, and can enjoy local sardines and ouzo.